The forum, held at the VFW Hall on Main Street, drew a sparse crowd, likely because it coincided with a two-hour weather delay in the opening of Beacon schools. The program featured updates from Beacon Police Chief Doug Solomon, Dutchess County Executive Marcus Molinaro and Dutchess Transit Administrator Cynthia Ruiz, along with questions from residents. 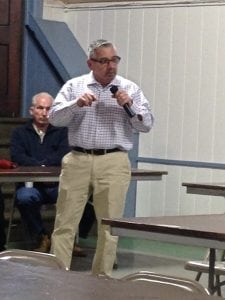 Deborah Bigelow, who owns the original Telephone Building at 291 Main St., said afterward that she is grateful the mayor is reviving the meetings, “where the average citizen can meet the people who run our city and county governments,” adding that she was impressed with the “considered and caring responses” to questions and concerns from the audience.

Perhaps the most significant update came from Molinaro, who spoke about the Dutchess County Stabilization Center, which will open this month in Poughkeepsie. The center marks not only a milestone for the county executive, who nearly five years announced the county had received funding to overhaul its mental health services, but also a major development in the evolution of mental health care in New York, which Molinaro characterized as “embarrassingly behind” the times.

As facilities like the Hudson River Psychiatric Center have closed, the goals of the state’s mental health care system have shifted, Molinaro explained, moving from an almost-exclusive focus on institutionalization to a more comprehensive program based on education, prevention and stabilization.

“The institutionalization of those with moderate mental illness is not productive,” he said. “It’s not healthy and it doesn’t produce the greatest return on any investment. It’s not humane.” The county’s focus now is “to provide the right kind of interaction so that we can divert you from an emergency room or jail” to mental-health services.

The Stabilization Center, located at 230 North Road in Poughkeepsie, will offer 24-hour mental health and substance-abuse care, as well as a 24/7 help line (call or text 845-485-9700) staffed by mental-health professionals.

Solomon, who was hired in 2012, spoke about the growth of Beacon’s police force, which in August was released from U.S. Department of Justice oversight after an investigation years ago into allegations of officer brutality. According to soon-to-be-released numbers, Beacon officers now patrol a city where major crime is at its lowest rate in five years.

The department’s release from federal oversight indicated it had been in “substantial compliance” for at least 18 months with recommendations regarding the use of force, the type and quantity of ammunition carried by officers, and its system for handing public complaints.

Now authorized for 35 officers — a four-person increase from when Solomon began — the department has begun “sector” policing, a method that keeps an officer in a particular section of the city, which Solomon characterized as more effective. The Beacon police have also established consistent foot patrols on Main Street, with training for bicycle patrol likely to be reinstated in the spring.

Further, the police have undergone crisis intervention training for dealing with the mentally ill and one officer serves on the Dutchess County Drug Task Force.