As a food magazine, Momofuko chef David Chang’s Lucky Peach consistently wobbles on a tightrope between hipper-than-thou, frat-boy chef, insider hijinks and actual culinary usefulness. Because it’s part travelogue, part cultural journal, I’ll concur that there’s usually something in every issue that opens your eyes to a different way of looking at food amid the party tricks

For instance, I still regularly return to a recipe from 2013’s Issue #6, The Apocalypse, which included amongst its  ruminations a conversation with New York’s four-star Del Posto restaurant head chef Mark Ladner. A post-Hurricane Sandy canned pasta taste test was a bit goofy but it led into this recipe for what Ladner called Calamarata alla Boscaiolo, a consistently tasty dish made — with the exception of a garnish of fresh parsley — from completely “shelf-stable” ingredients.

But not just any ingredients: The recipe is an unexpected and surprisingly sophisticated combination of dried pasta (short, fat, tube-shaped calamarata), reconstituted dried porcini mushrooms, olive oil-packed tuna belly and canned cherry tomatoes, all livened up by a distinctive Sicilian sun-dried tomato paste known as strattu (or estrattu) and a spicy Calabrian pepper condiment known colloquially as bomba (“the bomb”).

Admittedly, some of these requirements are not typical pantry staples, but thanks to a culinary tour of Sicily, I was aware of the power of strattu and happened to have stockpiled a few cherished jars. My original calamarata source was the late-lamented Joe’s Italian Deli in Fishkill and I have since found acceptable substitutes at Vera’s in Cold Spring and find that large short rigatoni will do in a pinch. 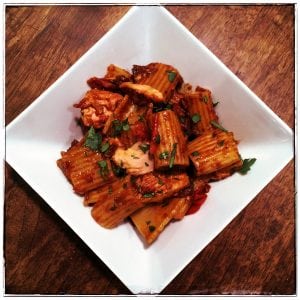 Good quality belly tuna is increasingly easy to find (Ortiz is my preferred brand and occasionally available at Adams), but the bomba has always been a problem and I usually substitute a generous teaspoon of chili flakes. Curiosity recently got the better of me and prompted a call to Chef Ladner, who was very forthcoming.

He bemoaned the fact that his favorite bomba supplier, Tutto Calabria, seemed to be playing fast-and-loose with their product names. But their Miscela Esplosiva fits the bill, as does the Calabrian viagru “Dynamite” available from zingermans.com. (Zingerman’s also stocks Villareale-brand strattu.)

Ladner also suggested the oil-packed tuna belly from Buon Italia in the Chelsea Market, but stressed that quality tuna is not that difficult to find, and “the important part is to drain the liquid and replace it with good olive oil.”

Asked if he would consider replacing the preserved tuna with fresh grilled or oil-poached fish, he recoiled at the idea, insisting it would fully change the character of the dish. He proudly referenced the iteration served at the white-tableclothed Del Posto — “Pasta alla Carrettiera” (roughly, “in the manner of the wagon driver,” as opposed to the original boscaiola, or “mushroom hunters’ style”) that incorporates guanciale (cured pork cheek) into an amatriciana sauce and buries a perfect scoop of tuna, mixed with some bomba and parsley, as a jewel-like surprise beneath the sauced pasta.

(It’s not that surprising that Ladner’s elegant presentations of what is actually cucina povera along the lines of such staples as pasta puttanesca or carbonara is leading him out of the comparatively elevated culinary orbit of Del Posto to take a chance on an upscale, quick-casual Pasta Flyer concept restaurant. It has the admirable objective of offering hungry folks everywhere a solid bowl of reasonably-priced, quality Italian pasta as fast as a bowl of ramen.)

Meanwhile back at the apocalypse — and our times may admittedly seem a trifle shall-we-say unsettled lately — we’re hopefully not really approaching the eschaton just yet. And though this recipe may well be a comfort for such disastrous events, it also makes a simple and amazingly quick winter meal. May all your prepping remain culinary.

* Substitutions: In a pinch, any sun-dried tomato paste — which is easier to find — may be substituted for the strattu. Bomba, which is actually a caponata-like mixture of Calabrian pepperoncini, eggplant, mushrooms and capers, could be more authentically replicated from a quick mash of pepperoncini and capers or, again, a hefty pinch of chili flakes, although true bomba — and strattu — is worth the hunt.