Meet Sara, who lets her imagination run wild, conjuring up resilient heroines who navigate a world of emotional landmines laced with simmering attraction.

There’s also another Sara, a Vassar College graduate and mother of two who, until recently, limited her creative output to fleeting moments during nap time.

Both Saras live in Garrison. In fact, they live together, in the same home and body: Sara Tormey, the mom, and Sara Jane Stone, the steamy romance novelist. 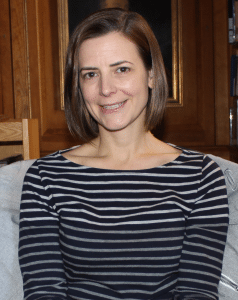 Sara Tormey (Photo by A. Rooney)

Sara’s latest book, released last fall by Avon Impulse, is Mixing Temptation, part of its Second Shot series. Her earlier works include Serving Trouble, Stirring Attraction, To Seduce a SEAL, Full Exposure, Caught in the Act, Hero by Night, Wild with You. She also wrote three novels for Harlequin, including Search and Seduce.

Her double life began when, working in the marketing department of a publisher on the advance mailing of a romance novel to booksellers, Tormey took a copy home. She found herself engrossed and began borrowing more books from the office. 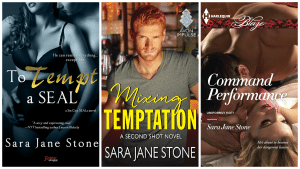 Despite having no background in creative writing — she studied theater in college and worked in sound design before shifting to publishing — she attempted to write one herself.

“It was much harder than I thought to start,” the Florida native recalls. “When I signed with my agent, she told me, ‘This will never sell, but you can write.’ The characters were there but I hadn’t yet figured out the structure. I needed to find those moments that readers expect,” such as “that dark moment when it feels that all is lost.”

The full moon shone down on the small clearing between the fir trees like a spotlight. Positioned high in the Oregon night sky, the beam of light narrowed in on the tall, broad-shouldered man with curly red hair. He wore faded blue jeans, a button-down green flannel, which hung open to reveal a white T-shirt, and a smile.

Caroline Andrews glanced at the tattered black sleeping bag resting on the forest floor. Her backpack sat next to it. But her gun was safely tucked into the waistband of her black cargo pants.

“Evening, ma’am.” The greeting slipped through his smiling lips as he raised his right hand. She reached for her weapon. But before her fingertips touched the barrel, the man’s fingers brushed his red curls. Caroline slowed her movements. Still, she kept her hand close to her gun, ready to pull it free from her pants if he gave her cause.

Look at that smile … You can’t trust him.

Tormey says she “loves the challenge of how to put the book together. What’s the editor looking for? What does the agent want? What does the marketplace demand?” She was able to answer those questions after her children were born and she left her publishing job, giving herself a year to learn to write.

Using texts such as a book on screenwriting called Save the Cat, she worked assiduously on plot and structure. “It’s about figuring out what publishers are looking for, which is often based on tropes, like ‘We want a best friend’s little sister story.’ I love the focus on what the readers want.”

Many of Tormey’s books have a military theme, though she has no background in the service. Instead, she is drawn to creating “strong-willed heroes and heroines who have some history to them, someone who’s willing to put service and duty above anyone else.”

Tormey isn’t the only Philipstown author to make a name for herself in the genre. Leonora Burton, owner of The Country Goose, has written 11 romance novels since 1978, including her latest, Intriguing Lady (2014).

Sometimes she addresses contemporary issues. In one book, her heroine suffers from post-traumatic stress disorder. “It’s tough to be a young woman in a climate that doesn’t acknowledge how women have been serving,” Tormey explains. “They come back and are in their early 20s trying to process all of it. It’s hard for everyone, but for women in particular.”

Another novel features “an AWOL marine who has been assaulted by her commanding officer and is hiding out, dealing with the issue that leaving the military is a bigger offense than ‘being the rapist’ — an intense situation.”

Some of the parameters are honed by readers, she says. “The one constant is that the lead character be likeable,” she says. “There are certain things you don’t want your character to do. I don’t use cheating; my readers wouldn’t get past that. Also, I emphasize consent; that’s important to me.”

Tormey says she enjoys being a part of the community of romance writers. She sees them and her readers at conferences held across the country devoted to the genre. Romance readers have strong opinions, some of which are expressed on Amazon (all of the Sara Jane Stone books have four-star or better ratings there). One reader wrote of Stirring Attraction: “The minute this brooding alpha walked onto the page I was completely captivated.”

The author says she hasn’t worked out how to explain the adult nature of the stories to her children when they are old enough to start asking. “Still working on that one,” she admits. “They know I write books and are fascinated by the pen name. They definitely know when I have deadlines.”

Tormey and her husband, Brian, who works in title insurance, moved to Garrison from Brooklyn 18 months ago. Although she hasn’t set any of her novels in the Hudson Valley (her latest takes place in New York City), she sees the possibilities. “There’s West Point, of course, and there’s charm here, and a sense of community, and I see a great deal of unique ‘side’ characters,” she says.

For now, Garrison will have to compete with the wilds of Oregon, where her husband grew up, as a setting. “Lumberjacks, helicopter logging, timber country,” Tormey explains. “All that good stuff!”