In talking about what inspires her art, Susan Walsh often uses words like compelled, contemplated, observed and noticed. “I noticed how old Polaroids were curled up,” she says. “It reminded me of leaves.” Or, she says, “one day I noticed how when peeling wallpaper fell to the ground it formed a sculpture, and that made me think about what we put in our homes and how it comes and goes.”

Walsh, a Beacon resident whose work is being exhibited there in a solo show at the Matteawan Gallery there that opened Feb. 18, could be described as a “noticer.” Consider her Wave Drawings series. “I mostly work with light and I wanted to try other elements,” she explains. “I tried wind, and it didn’t work. Then an idea came to me: couldn’t I collaborate with the waves? Couldn’t I mark a moment in time with a wave?” 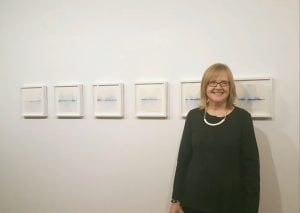 Susan Walsh at the opening of her exhibit at Matteawan Gallery on Feb. 18 (Photo provided)

After drawing a line of gouache across the center of a piece of paper, Walsh holds it down in shallow ocean water as waves wash over. The motion of the waves records her location and a specific moment in time. “When they’re shown in a line, you can see the time the tide crashed through it; you can almost see the tide in it,” she says. “You get the energy of the water. Seen as a group you get the idea of horizon and the water pushing and pulling.”

In Walsh’s Only The Sun Can Prove That I Am Useful series, noticing and marking are again factors. After spotting a sundial on the ground near her home, Walsh became fascinated by them. Spotting nails on a wall, and the shadows they created, Walsh made a connection to the sundial and made sculptures of wood panels using paint, nails and the graphite. This reminded her of connections made between one gallery and another at Dia:Beacon, which she visits often, and she noted the GPS coordinates between them and recreated it in sculpture. 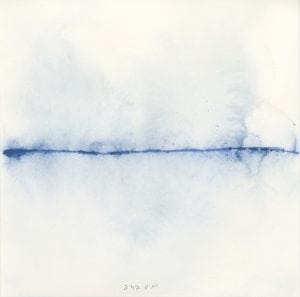 Walsh then photographed the panels and printed one version of each on drawing paper. Her photos capture a specific moment when sunlight hits the nails and creates shadows that merge with her drawings, playing with perceptions as well as creating what Walsh calls “lyrical time — not literal, but more feelings I had, created graphically.” 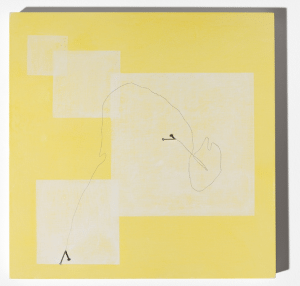 Another series, Only Mark The Bright Hours, evokes the sundial more directly, on wood panels painted bright yellow, upon which straight graphite lines contrast with loose linear threads. The threads’ shadows serve as a reminder of the incremental changes in landscape caused by sunlight.

After growing up in Chicago and spending her 20s there (she earned a master’s in fine art from the University of Illinois at Chicago), Walsh moved to New Mexico, living for five years in a place where, as she puts it, “the open sky helped me to see things in a different way, and gave me a contemplative practice.” At age 40 she moved to New York City and later Beacon, where her studio in the old Beacon High School contains “glorious light which streams through huge windows,” she says. 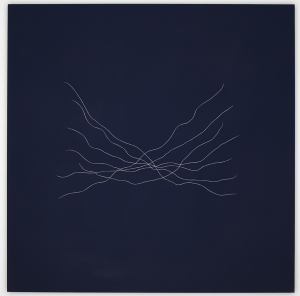 Walsh moved to New York for a number of reasons. “As an artist I knew I would have a much broader audience, and also there’s something about leaving the place that you grew up in that creates new worlds for you,” she explains. “My work changed so much because everything was so creative, vibrant and new. I do well with extreme contrasts and my work is really ‘quiet,’ whereas New York is like my fire tunnel.”