It’s a brisk, late-winter day in the hamlet of New Hamburg, north of Beacon, but at Obercreek Farm, spring is on the way. The high tunnels are bursting with winter greens, seeds are sprouting in a heated propagation house, a faded white shack straight out of an Edward Hopper painting is being converted into a brewery (for the third-acre of hops that will be grown) and stacks of beehives stand at the ready to be tended by a retired pediatrician who loves bees but hates honey.

Obercreek’s main source of revenue is its 200-member Community-Supported Agriculture (CSA) program, in which subscribers receive food from the farm each week from June through November. Obercreek is 240 acres but only 14 are farmed. Plans are underway to expand to 25 acres, but for that to happen, farmer Justin Seelaus has to make sure there’s demand.

“That’s where the CSA Coalition has been helpful,” he says. “They gave us a marketing base.” 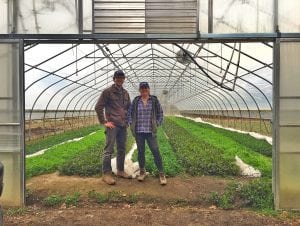 Justin Seelaus and Jessica O’Callahan of Obercreek Farms in New Hamburg (Photo by B. Cronin)

The Hudson Valley CSA Coalition is a new program created by Glynwood Farm, the 20-year-old nonprofit in Philipstown. Funded by a three-year federal grant and modeled on a Wisconsin program called FairShare, the coalition hopes to bring Hudson Valley farmers together to address common problems. And the biggest problem right now is getting the word out about CSAs to increase membership.

“Most of us who are farming are limited in our ability to reach consumers, either because of time, lack of expertise or the ability to step away,” says Faith Gilbert of the Letterbox Farm Collective in Hudson, which hosted a farmers’ summit in 2014 at which the seeds of the coalition were sown.

There are about 100 CSAs in the Hudson Valley. Many have growing pains when they find their membership plateaus. Early recruitment strategies reach “the people who can be easily reached, and are easily attracted to CSAs,” explains Sara Grady, the vice president of programs at Glynwood. “The question is: How do you reach beyond that?” 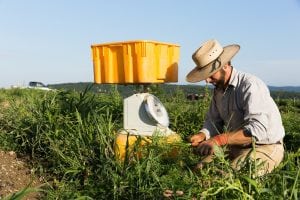 Grady says one farm told her it was having difficulty finding members in the community but could continue offering shares because they quickly sold out in Brooklyn.

“That speaks to a lot of different ideas around density, communication, and convenience,” she says. “But it was also an illustration of the fact that here we are in this region, which is agricultural and has historically been a food-producing region, and farmers are having to work hard to reach their neighbors. That’s one of the real motivations behind this, to engage residents of the Hudson Valley in the model of CSAs.”

The coalition’s first project is hudsonvalleycsa.org, where consumers can find and join nearby CSAs. The coalition has been marketing the portal aggressively, not only through print ads and ads on the Albany-based public radio station WAMC but on Top 40 stations as well. It also pushed “CSA Day” in February to encourage potential members to sign up early, when farmers are typically low on cash after ordering seeds and supplies. In New Hamburg, Seelaus says he noticed a significant uptick in memberships on CSA Day. 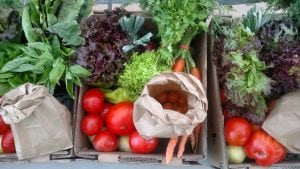 If the coalition can help CSAs sell out and expand their shares, it sees more farmland being protected and more sustainable food being grown. Many CSA farmers are keenly interested in food justice and would like to be able to reduce the cost of each share and offer subsidized or free shares to those who can’t afford them. That won’t happen until the CSAs can become sustainable themselves, and for that to happen, the public has to buy in.

“Within 20 miles of Hudson, which is a town of 7,500 people, there are over 20 CSA farms, 18 of which are in their first 10 years,” says Gilbert. “That’s exactly what we want, but we have to make sure that the general population is keeping pace.”