Baseball fans will celebrate Opening Day on Monday, April 3, a tradition that for the Yankees began in 1913 and for the Mets in 1962. But in the Highlands, opening day dates to the mid-19th century, when the game was moving up the Hudson River from New York City.

“The game of base ball has now beyond question become the leading feature of the outdoor sports of the United States,” wrote Charles Peverelly in his 1866 Book of American Pastimes. “It is a game peculiarly suited to the American temperament and disposition.” 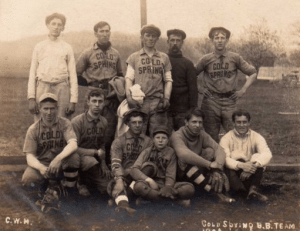 A Cold Spring team from 1906 (Photo courtesy of Bob Mayer)

Cold Spring in the 1860s and 1870s had at least three amateur teams: the Kelloggs, the Undercliff and the Putnams. The Undercliff, established on Aug. 10, 1865, wore a uniform of a white cap, white shirt and blue pants and took its name from the Cold Spring estate of poet and journalist George Pope Morris. The Kelloggs were named for Clara Louise Kellogg, an opera singer whose home was across from present-day Boscobel. Both teams practiced at their namesakes’ estates. Games typically began at 4 or 5 p.m. 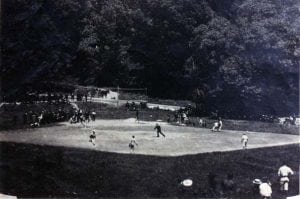 A baseball game played around 1900 at Kemble Field, the site that later became Marathon Battery. (Photo courtesy of Bob Mayer)

The teams were male social clubs as much as they were about sports, with elected officers and members — in 1866 the Undercliff had about 50. The sport was far less costly than yachting or rowing, since the only expense was the uniform.

By the 1880s the village had a number of teams, including the West Point Foundry, Klondykes, Pastimes, Hardly Ables and Never Sweats, according to Bob Mayer, a longtime member of the Society of American Baseball Research who lives in Putnam Valley. Games were played at Vinegar Hill, near Fair Lawn, the home of artist Thomas Rossiter off Route 9D south of Cold Spring across from what is now the Manitou School, and at Kemble Field off present-day Kemble Avenue near the Foundry Preserve.

With baseball flourishing in New York City, in 1857 the Knickerbockers Base Ball Club proposed standardized rules at the annual meeting of the National Association of Base Ball Players (NABBP), including the nine-inning game and nine-player lineup. The Newburghs, established in 1856, were the Hudson Valley’s first team. The Hudson River Base Ball Club, also in Newburgh, was organized in 1859. 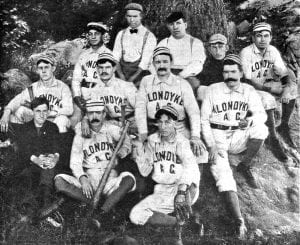 Klondyke A.C., a baseball team that played in Cold Spring in the 1890s (Photo courtesy of Bob Mayer)

In 1869 the NABBP allowed clubs the freedom to declare themselves professional if owners or sponsors wanted to pay their players. Cold Spring’s players remained amateurs. A report in The Cold Spring Recorder on July 11, 1874, noted that “never in the history of base ball was the game so popular as it is now, and not in the so-called ‘good old days’ was amateur playing so flourishing as at the present time.”

A letter from W.E. Nelson, the sheriff of Cold Spring, to John Day, the sheriff of Brewster, whose team six weeks earlier had easily defeated the Cold Springers at Brewster, 20-0. Historian Bob Mayer, who shared the letter, says he has not found any record of a rematch.

What is the matter with your Ball Club? Are they afraid of the real Puts [Putnams]? If they are we will look around & get some small boys to play them for the sake of having them over here just once.

The Recorder includes accounts of a number of games, such as on Aug. 23, 1873, when it reported that the Kelloggs had lost on Wednesday, Aug. 6, at Vinegar Hill to the Newburgh Active, 25-17. Two weeks later, the team traveled to Newburgh for a rematch. “The Active went to the bat and brought in two tallies, while the Kellogg were whitewashed [unable to score] three times in succession, the Active in the meantime scoring six, and having got the lead maintained it to the end,” the paper reported. 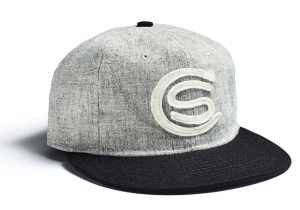 A baseball cap with the logo of a baseball team active in Cold Spring around the turn of the 20th century, available at Old Souls on Main Street (Photo provided)

Although it was an away game, the Kelloggs supplied the umpire, named Lloyd, who the Active players and fans concluded had been “the best and most impartial umpire that ever came to the city with an outside club.”

After the game, the Kelloggs were fed supper and escorted down Water Street by the Newburgh players to the ferry, “where after bidding adieu to them went on board the boat amid cheer after cheer, which was returned with great enthusiasm.”

The following Saturday, the Undercliff, wearing new uniforms of blue knee breeches, white shirts and striped stockings, played at Poughkeepsie, where they lost 18-15 after giving up four runs in the bottom of the ninth. The Recorder noted that “the grounds were miserable, there being two circus rings in the center of the field” and that the Juniors had used several professional players. The Poughkeepsie team also did not speak as kindly of umpire Lloyd’s calls. 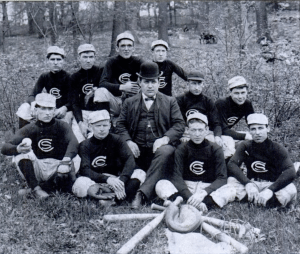 The next summer, on July 11, 1874, The Recorder reported on a July 4 game in which Undercliff hosted the Magnolia Club of Newburgh at Vinegar Hill. The home team prevented the visitors from scoring in seven of the nine innings and won, 14-3. On the following Monday, July 6, a large crowd gathered at Vinegar Hill to watch the Undercliff take on its intervillage rivals, the Kelloggs. “A great deal of heavy batting was done by the Kelloggs,” The Recorder reported. “The Undercliffs became demoralized and the score ran up very high,” with the Kelloggs winning, 50-15. The outcome, the paper said, had not been unexpected.