When Jessica Cole and her husband decided to move closer to his family in the Hudson Valley, the cost of shipping their furniture from Las Vegas was so expensive they sold it instead.

The plan was to buy new furniture in New York, but of course that was also expensive and quickly depleted their budget. Undaunted, Jessica hit flea markets and yard sales. She found plenty of furniture, but most needed refinishing.

How hard could that be? After doing research online, she soon was collecting “oohs” and “aahs” from friends, family and neighbors. A side business — perfect for the mother of two young children — was born. 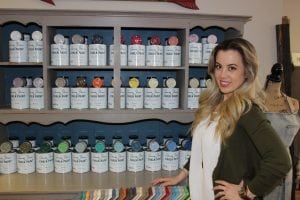 Cole with a selection of Chalk Paint (photo by A. Rooney)

That sideline has since turned into a Beacon storefront, Knot Too Shabby, where customers can purchase paints and other finishes for refinishing as well as take workshops to learn how to do it.

Having learned about Chalk Paint, a brand from the British company Annie Sloan, Cole adopted its no sanding, priming or stripping techniques. Scouring yard sales, she learned by doing, and started “flipping” refinished furniture for a reasonable profit on Craigslist and Facebook.

The first piece she refinished sold within hours for $350. “One piece turned into five, and it snowballed from there,” she recalls. “I was selling pieces and taking refinish requests, sometimes up to 10 per week.” 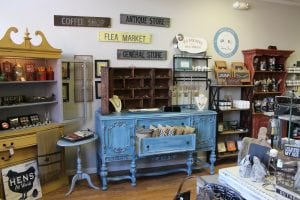 Examples of furniture handily double as showcases for many of the other items found at Knot Too Shabby. (Photo by A. Rooney)

People began asking, “Do you have a store?” and where to find Chalk Paint, which can’t be purchased online. Her husband, who is a police officer in Westchester County, convinced her to think about a retail space. She contacted Annie Sloan about becoming a dealer, or “stockist,” for its products. After a long phone interview in which she described her vision for the store, she was sent by train for a visit to the company’s headquarters in Louisiana.

She did not go into the venture cold. After growing up as a “military brat” in the south and southwest, Cole landed in Las Vegas, where she worked in design and construction and in the engineering department at MGM Resorts before moving east.

Cole says she enjoys leading workshops at the store, which are three hours long and held outside store hours. “My passion is teaching people how to do it themselves,” she says. Chalk Paint 101 teaches participants how to use four basic finishes, while 102 delves into specialized techniques like gold leaf, decoupage and stenciling. Cole is planning workshops on kitchen cabinets and plans to open a garden behind the shop for crafting parties and outdoor workshops. 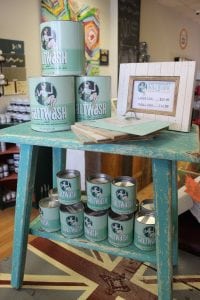 Saltwash is a popular product at Knot Too Shabby. (Photo by A. Rooney)

Although the distressed farmhouse look is popular, Cole says “it’s not all rustic.” The water-based paints come in 35 colors and are odor-free, dry quickly and adhere to metal, glass, plastic and lamp bases, as well as wood, she says.

Cole estimates that 85 percent of her customers come specifically for the paint. “Most know I’m here; they come from Connecticut, lots of Westchester, across the river and even from the city for the workshops,” she says. Knot Too Shabby also stocks greeting cards, handmade signs, pillows, totes and jewelry, and there are additional furniture pieces stored offsite that are shared on Facebook.