When Cecile Weiland took a ghost tour of Boscobel a few years back, she probably should have asked for a professional discount. As co-executive producer and show runner since 2014 of the paranormal series A Haunting, which airs Fridays at 9 p.m. on TLC, she’s somewhat of an expert in modern-day specters.

The hour-long show’s format features  interviews with people who claim or believe they have encountered ghosts interspersed with reenactments of spirit outbreaks. Filmed in Virginia, A Haunting began its 10th season on March 17. 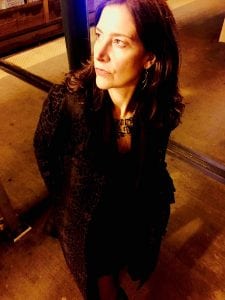 The show features people in ranches, split-levels and Victorians a lot like those in the Highlands. The difference: These homes are supposedly packed with ghosts, demons, poltergeists and shadows. A key element to the success of A Haunting is the producers’ ability to create suspense. “It’s like composing music, a combination of silence, sound and sound effects, learning when to be quiet and let things play out,” Weiland explains.

As show runner, Weiland (who is known professionally as Cecile Bouchardeau Weiland) oversees the creative aspects and day-to-day operations of A Haunting. For the most part, she works from her Garrison home, though she travels to Virginia for casting and filming. That means many hours on the phone and Skype working with the production and research team and editing footage on her computer for episodes with titles such as “Living Nightmare,” “Mother’s Terror” and “Fear Feeders.”

Weiland majored in French at Cornell and earned a master’s degree in broadcast journalism from Northwestern University. “Northwestern was so amazing because I learned ethics!” she says with a smile. “Even though I work in entertainment TV, we have rigorous fact-checking that goes on for each episode.” 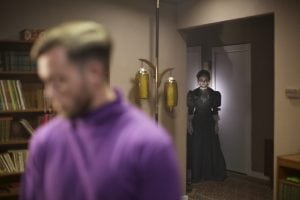 Fact checking? “We have a team of researchers who spend hours interviewing the victims of hauntings and the paranormal investigators, the mediums, the psychics over the phone,” Weiland says. “While it can be difficult to identify whether these people are pulling our leg, the more witnesses to the haunting we interview, the more credible the haunting to the viewer. What is important is that we remain faithful to the person’s experience.”

The producers take creative license with the ghosts and demons, she says, but “as in all spooky movies, we have learned that less is more, so we try to avoid full-on shots of the entities and leave the rest up to the viewers’ imaginations.”

After graduating from Northwestern, Weiland gravitated toward documentary film, landing her first job at Walter Cronkite’s production company. In the mid-1990s she worked as a producer for Great Books, a series hosted by Donald Sutherland in which actors re-enacted scenes from classics such as Nathaniel Hawthorne’s The Scarlet Letter (clearly a gateway experience). In the 20 years since, she’s done stints in reality TV — MTV’s Real World: Paris and I Want to Be a Hilton, with Paris Hilton’s mom Kathy. 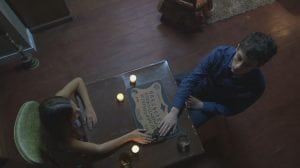 Weiland has become an expert not just in the types of ghosts but in the types of people who hunt them. “There are so many paranormal investigators — police officers, private investigators, clairvoyants, mediums, psychics, demonologists and ministers who are allowed to perform exorcisms,” she explains. “Certain people specialize in closing portals where demons come in. Others specialize in sending ghosts back to the light from limbo.”

The producers talk to everyone involved, including skeptics — mothers, fathers, kids — the more the merrier. The ghost stories that scare her most, Weiland says, are when a person finds him or herself being haunted while home alone. “We’re following the psychological journey of fear with this person, on a step-by-step journey in their head.”