Haldane school board has second thoughts

The Haldane Board of Education was set to vote on April 4 to approve a proposal for an athletic Hall of Fame prepared by the high school’s athletic director until the mother and sister of an outstanding volleyball player voiced objections.

The proposal came out of discussions between Superintendent Diana Bowers and Maureen Kazel, whose daughter Kelly Vahos graduated from Haldane in 2015 after scoring more than 1,000 career kills. (She now plays for James Madison University.) Kazel expressed concern that banners in the gymnasium only recognize individual achievements in basketball and track.

Bowers and Athletic Director Christopher Salumn had organized a committee of coaches, teachers and booster club members to discuss ways to recognize athletes from the school’s 16 varsity sports. After much of what Salumn described as “passionate” debate, it proposed a Hall of Fame, with athletes nominated by nine-member committee at least five years after graduation.

Inductees would be recognized by name and sport on a large banner hung in the gym, Salumn told the board at its March 22 meeting. The team championship banners already in the gym would remain, as would track and field records and banners that recognize basketball players with at least 1,000 career points.

A nine-member committee would consider nominees. It would consist of three Haldane coaches, a current administrator, a community member, the president of the Booster Club, two alumni and a retired Haldane district employee. The athletic director would assist but would not have a vote.

Anyone could nominate an athlete except relatives. No self-nominations would be accepted.

An athlete could be considered five years after his or her graduation date. A team also would be eligible after five years.

Inductions would take place over homecoming weekend as a fundraiser for the Blue Devil Booster Club.

Trustee Margaret Parr asked Salumn on March 22 why the “1,000-point club” could not include a volleyball player. “You only get one point in volleyball, and you get two or three in basketball,” she pointed out.

Salumn said the committee, which included the middle school principal, the varsity boys’ basketball, baseball and softball coaches and the immediate past and current presidents of the athletic booster club, feared recognizing other sports would open the floodgates. 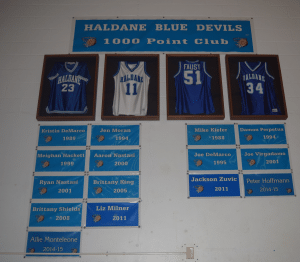 The “1,000 Point Club” basketball banners hang on the wall at the Haldane gym, along with four retired jerseys. (Photo by Michael Turton)

“With basketball it has traditionally been a 1,000-point club not only at Haldane but at every school in the country,” Salumn said. In the proposal, the athletic director wrote that he feared removing the 1,000-point club for basketball would “cause more backlash” than leaving it up. He did tell the board he hoped to make the banners in the gym more visually appealing, including by consolidating the 1,000-point banners into one.

Speaking at the board’s meeting on April 4, Kazul and her daughter, Brooke Vahos, a senior at Haldane who was also a standout in volleyball, said they had no objection to the Hall of Fame but questioned why their daughter and sister and other high scorers could not be recognized with a banner.

Beacon High School established its Hall of Fame in 1996 and inducted its first class in 1998. Its selection committee includes three coaches, two Hall of Fame members, two community members and two at-large members. Athletes and teams are eligible six years after graduation. A maximum of three athletes, one team, and one coach may be inducted annually.

“Ally Monteleone and Peter Hoffmann [who both graduated with Kelly Vahos] have banners in the gym for scoring 1,000 points,” Brooke Vahos said to the board. “Why can’t my sister get her banner on the wall?”

A few members of the board seemed surprised by the comments, admitting they had not given much thought to the implications of the Hall of Fame proposal or the system for athletic recognition. A vote on the proposal was postponed.

Trustee Evan Schwartz said he viewed the issues as distinct, suggesting the board could approve a Hall of Fame but also address which athletes should be recognized by individual banners or awards.

But in the Hall of Fame proposal, Salumn said it was designed to eliminate recognition for individual milestones. “For example, if we honored only career goals it would take away from a player that may have been an all-section goalie. These decisions are difficult across all sports and are one of the many reasons why an athletic Hall of Fame is a better way to recognize our student-athletes individually as opposed to a career achievement statistic banner.”

Salumn also argued that honoring individual achievement could damage team chemistry. “For example, if we were to put a banner up that said ‘100 career goals,’ would players be more likely to try and score even though they had a wide open teammate?” he wrote. “Kids would be more likely to try and get their name on a banner for recognition and it may take away from the team’s goals.” He argued that team banners “carry more weight” than those for individuals.

Brooke Vahos found that argument lacking. “If you’re striving for a personal goal, that’s in no way harmful to a team effort,” she told the board. “In the case of volleyball, you can’t attain 1,000 kills without the participation and success of the team.”