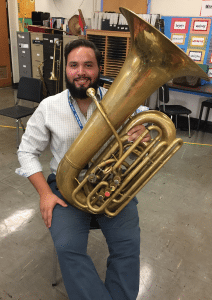 Ulysses Torres, 26, is in his first year as the music teacher at the Garrison School.

I don’t have one! Both my parents have middle names. My mother’s name is Virginia Leticia Damian Galvan Torres. People ask me all the time if my parents loved literature, but Ulysses is a common name in Latin America. Although my siblings’ names are Jason, Lesley and Vanessa [laughs].

What instrument do you play?

The tuba. I started in the fourth grade with the trumpet. But my sixth-grade music teacher, Mr. Sachs, said to me, “You look like a tuba player.” He asked me years later, “Do you know why I switched you to tuba, Ulysses?” “No, why?” “You were an awful trumpet player. It was pretty hopeless.”

What is the challenge of playing the tuba?

It’s heavy. My tuba was made in the 1930s, so it’s made of thicker brass. It was made for the U.S. Navy band and began as an upright but has been altered and is now a Frankentuba. My repair guy bought a bathtub they use for sheep so he can wash it.

It’s a program I’ve been involved with for about 20 years that provides low-cost lessons for inner-city students. We have a site at songcatchers.org. I started with it when I was 7, along with my brother and sister. We had a tough time after our apartment burned in 1997. But a nun in New Rochelle, Sister Beth Dowd, started an after-school program that offered $5 lessons. I’m now on the board of directors.

You are a long-suffering soccer fan.

I love Newcastle United [in an English professional league]. They’re bad and have been relegated to the second division, but I like underdogs. It’s so much more special when they achieve.