Residents question safety after it cuts into sidewalk

A much-discussed wall that jutted several feet into a Main Street sidewalk near the Beacon Natural Market came down this week.

The wall was designed as a support for the upper floors of a residential and retail building being constructed at 344 Main St. It attracted attention because it extended about six feet past the adjacent natural market, leaving only a few feet of sidewalk near the intersection with Eliza Street.

The Beacon Planning Board approved plans for the project a year ago, granting the property owner, Fishkill-based developer Sean O’Donnell, permission to construct 24 apartments on three stories over a ground-level retail space. The project had earlier been approved for 18 units, but O’Donnell revised the plans to make the apartments smaller. 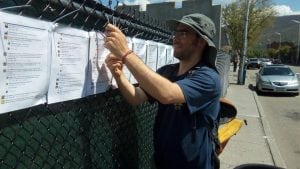 Beacon resident Ori Alon posted a printout of a Facebook thread questioning the placement of the wall along the fence at 344 Main. (Photo courtesy Ori Alon)

The support wall creates a 5-foot alley between the building and the market, said project engineer Mark Day.

In late April, a number of Beacon residents began questioning on Facebook how the wall could have been allowed by the city. Some said they planned to protest on April 29 but those plans were dropped after word circulated that the extended section of wall was being removed.

“I was confused when I saw it as to why it came so far forward from the building next to it,” said Beacon resident Jessica White, who had planned to protest. “After it came up, it appeared this could be a permanent issue that would affect pedestrian safety. It didn’t seem greedy or malicious, but more careless.”

During a City Council meeting on May 1, City Administrator Anthony Ruggiero said the parcel’s property line does extend into the sidewalk, but the developer “realized how it looked and he wanted to do the right thing.” On May 3, Day added that O’Donnell “wants to work in the city. He wants to be a good neighbor.” 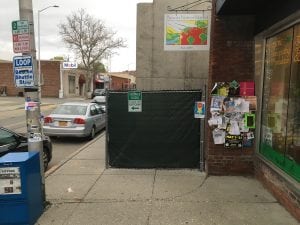 Before its removal, the support wall at 344 Main St. extended several feet past the neighboring Beacon Natural Market. (Photo by Andrew Bell)

Day said O’Donnell would shorten the building by six feet to align with the market. He plans to rent parking spaces from the nearby Citizens Bank for tenants. Day said he did not know what business would open on the ground floor or when construction would be completed.

O’Donnell purchased the property in 2013 after the city foreclosed on it. He presented his initial plan to the Planning Board in 2014; it was later revised to reduce the number of stories from five to four to conform to requirements of the Central Main Street zoning district. (A five-story building would have required O’Donnell to include additional affordable housing units and to make 15 percent of its street-level area open to the public.)

The developer will not need Planning Board approval again after removing the section of the wall, Ruggiero said, although revised plans will be reviewed by the board’s architectural review subcommittee. It’s not known whether the building’s smaller footprint will affect the number of apartments.