Craving the communion with nature that had been part of her childhood on a farm in upstate New York, photographer Amanda Means began making sojourns from Manhattan to the countryside. She examined leaves and the skeletons within them — the veins, the textures. Then one day she looked up and noticed a leaf, the sun streaming through it, exposing the unknown.

“I realized in that instant that I could use this leaf like a negative, putting it inside an enlarger,” she recalls. In other words, she could “photograph” the leaf without a camera. 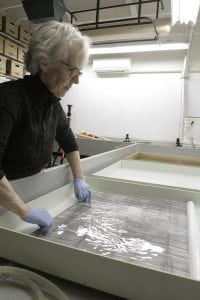 Amanda Means, working in her darkroom (Photo by William Irwin)

In the 30 years since that moment, Means has used variations on her discovery, experimenting with dimensions and color. Last month, the Beacon artist was one of 12 photographers to be awarded a fellowship given annually by the Guggenheim Foundation. The grant, which is usually in the range of $45,000, will give her time to work without financial concerns. More than 3,000 people applied from the U.S. and Canada, and 173 were chosen. 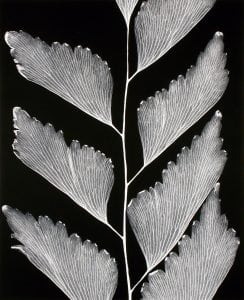 Means has a studio in the former Tallix foundry complex. In her process, she places an object into a construction she has created within the enlarger, enveloping it in the black cloth associated with photographers of the early 20th century. Light from an interior lamp passes through the object, and/or is reflected, and the lens is pointed at photo paper taped to a facing wall. The result is a negative image.

“This is a different kind of light than the reflected light used by cameras containing film,” Means explains. “The light in my photographs seems to emanate from the image itself.” The heat from the lamp often causes the flowers to wilt and give off a scent. “You feel them to be creatures,” Means says. 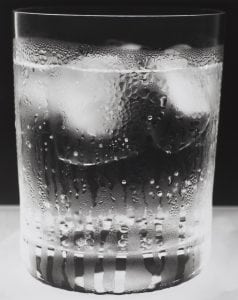 As a child she was always outdoors with a camera (her mother loved photography). As a student at Cornell University, she taught art to children, which was eye-opening. “They work with an immediacy; they aren’t trying to make it ‘look like’ something,” she says. “I was trying to get that into my own work.”

Her photography was influenced by abstract expressionists, particularly painters Willem de Kooning and Franz Kline and photographer Aaron Siskind. In her 20s, she took a job in a Manhattan printing lab where she specialized in processing large black-and-white prints, for Robert Mapplethorpe and other prominent photographers who saw the results and asked her to handle their prints. 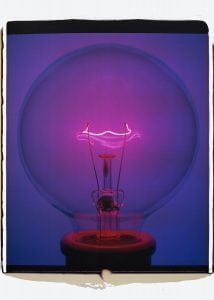 After working with flora, Means chose an unlikely successor — light bulbs — after spotting one on a shelf in her darkroom. Studying its interior, it occurred to her “that they are kind of flowers of the city,” mass-produced but each different.

A glass of water led to another series. “I picked it up and, as I did, the lamp behind it shone through and I saw something,” she says. That moment led to experimentations with liquids and ice, studying the visual effects of condensation and bubbling. (For more of her work, see amandameans.com.) 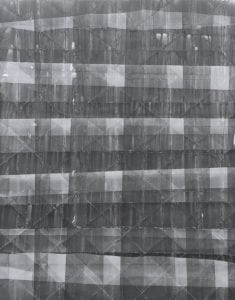 That intersection of science and art is no accident. Means says she’s fascinated by botany and all things cellular. She takes extensive notes, marking precise timings and configurations. Still, she says, “even though I may have an idea of how something may turn out, I can’t actually know what it will look like until those few seconds after it begins developing.”

“I always feel like the photographs have a life of their own,” she adds. “This medium: it shows me things. Sometimes I have to listen and wait until a deep and wonderful conversation surrounds me.”