Despite efforts, iconic fish has been slow to return

It’s May in the Hudson Valley and the Shadbushes are in bloom. But the fish they’re named for are nowhere to be seen.

The bush got its name because it blooms around the same time of year that the shad return from the Atlantic to the Hudson River to spawn. This migration has been a cultural touchstone for people along the Hudson for thousands of years, and shad festivals were held every May to catch and eat them. The shad’s scientific name, Alosa sapidissima, roughly translates as “herring most delicious.”

But shad festivals are a thing of the past; The last major one was held at Boscobel in 2011, sponsored by Riverkeeper. One reason for that, says Riverkeeper’s John Lipscomb, is that the Hudson shad population had become dangerously low. In fact, Riverkeeper and other groups such as Religious Organizations Along the River (ROAR) were instrumental in convincing the state to end commercial fishing in the Hudson in 2009.

Shad are important because they provide a vital link in the food chain, eating plankton and then in turn being eaten by larger fish and bald eagles, explained John Waldman, author of Running Silver: Restoring Atlantic Rivers and Their Great Fish Migrations. Lipscomb compares them to gazelles, which provide a similar link between plant life and carnivores. 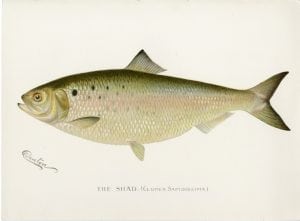 A watercolor of an American shad by Sherman Foote Denton, from “The Fish and Game of the State of New York” (1895)

Waldman said that “if we can solve the shad, we can solve everything else” that needs to be addressed in the Hudson ecosystem. That’s because “shad are large fish that want to go pretty far upriver. If you get shad far up the river, then the bass, the sturgeon, the alewives, the lampreys, are also going to make it. If they’re successful in making their way all the way up the river to their spawning grounds, then everything else should follow.”

Seven years ago, the state issued an ambitious, multipronged plan to save the shad, but even with the fishing ban Lipscomb said that its numbers haven’t improved much. The main reason for that, he said, is the Hudson itself.

Shad are diadromous, meaning they can live in both salt and fresh water. They return to their native rivers to spawn in the spring. Newly hatched shad spend the summer in the river and swim out to sea in the fall, remaining there three or four years until they make their way up the Atlantic coast in search of their native river to spawn and begin the cycle anew.

The population’s stagnation remains a mystery, although Waldman and Lipscomb offered a few hypotheses.

First, the generations of fishing was devastating. By waiting until mature shad come up the river and mass in large numbers waiting for water temperatures to rise so they can continue upstream, then catching them with nets before they can spawn, fishermen were removing the strongest members of the species.

Third, invasive species such as zebra mussels eat the plankton that shad feed on.

Fourth, Waldman estimates that power plants may be killing off up to 20 percent of the spawning population when fish are sucked up by cooling systems that use river water. 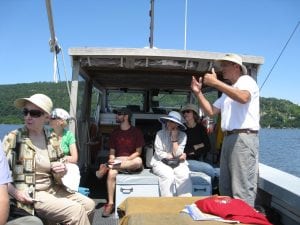 Riverkeeper John Lipscomb (standing) on the Hudson near Peekskill in July 2009 with members of Religious Organizations Along the River. (Photo provided)

However, the damage may be done even before the fish reach the Hudson. Lipscomb said many end up as “bycatch” for fishermen catching Atlantic herring off New England. The herring stay at sea but mingle with 2 to 3-year-old shad,which are nearly ready to spawn.

Lipscomb said that if herring fishing boats were better monitored, as suggested in the state’s shad-recovery plan, researchers could get an idea of where and when they mix with Atlantic herring, which could lead to regulations that ban fishing in those areas.

Many river shad also swim into the Delaware Bay before realizing they’re in the wrong river. Unfortunately, many end up as bycatch at a striped bass fishery that operates in the bay. The Atlantic State Marine Fisheries Commission regulates at which point in the bay shad must be released, and Lipscomb worries that the boundary needs to be more restrictive. (The ASMFC did not respond to a request for comment.)

Those holding out hope that shad will one day populate the Hudson in sufficient numbers for fishing will be encouraged by what occurred in the Kennebec River in Maine. For years, anglers and conservationists sought to remove antiquated dams thought to be blocking diadromous fish such as alewives.

With the removal of the Edwards Dam in 1999 and the Fort Halifax Dam in Winslow in 2008, the ancient spawning grounds of the Sebasticook tributary again became reachable. The alewives returned in astonishing numbers almost immediately, and Benton, Maine, now hosts an Alewife Festival each May.