Lotero, a senior on the girls’ varsity lacrosse team, scored eight goals in the Bulldogs’ 16-11 win over Pawling on May 8 and followed that up with four goals in a home loss to Sleepy Hollow on May 11. 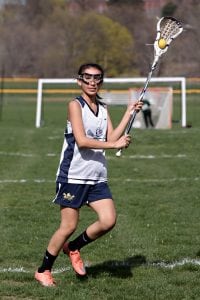 Lotero led Beacon, which finished 2-14, in assists and was second in scoring behind senior Jessica Musacchio.

“Eliana has been fantastic on the attacking end,” said Coach Brian Lange. “She reads defenses well, and is smart in her decisions to drive or distribute. Moving her from midfield to attack allowed her to take advantage. She worked hard on her cutting, and side-arm shot this season, and it has paid off in these later games. As a lefty, her ability to change pace and roll the crease has been effective.”