Residents are asked to remain calm

After a review in The New York Times, a book by a couple in Syracuse, U.F.O. Sightings Desk Reference: United States of America 2001-2015 has drawn attention to the phenomena of people seeing things in the sky they can’t immediately identify, a.k.a. unidentified flying objects. The book is a statistical analysis of reports made to the Mutual UFO Network (MUFON) and the National UFO Reporting Center (NUFORC). Here are select sightings from the Hudson Highlands, edited for brevity.

In 1966 I was 8 years old and at sleepaway summer camp at Surprise Lake. That night in our bunk, there was a light shining through the window. We figured a counselor must have set up a flood light. That night I dreamed two figures were standing over me looking down at me, one a typical grey with almond-shaped eyes. On the right, a round-headed, round-faced and round-eyed dude with a mouth stuck in the position like he was saying “Ooooh.” The grey inserted a probe into my forehead.

I pulled the covers over my head. I figured it was a dream. The next evening the counselors transformed an indoor basketball court into a “spacecraft.” A lot of kids were screaming in terror. In retrospect I realize that the whole encampment — 19 kids and five teenaged counselors — had been abducted by the light, and the counselors subconsciously reenacted the whole event. 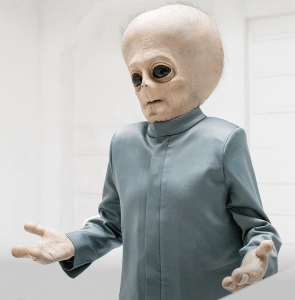 A grey alien from the TBS comedy “People of Earth,” which is set in Beacon and has been renewed for a second season that begins later this year.

I was about 15 and was walking with a friend on Manitou Road west of Route 9D at about midnight. We were walking with our backs to the highway and noticed the sky light up. We turned and saw an object in the sky, about 1,000 feet up and half a mile south of us. I saw a white, glowing disk that stood still and made no sound.

After a second or two, the disk moved closer and covered a half-mile almost instantly, stopping on a dime. After another second or two, it veered off to the east, in the area of South Mountain Pass. I have been encouraged by books like Night Siege to think that sightings in the Hudson Valley have not been unusual.

I was looking out the window of my elementary school classroom. Against the backdrop of the mountains on the other side of the river, I saw a bluish-grey metallic oval object. It zipped around at high speeds at various angles, then would pause and shoot off. I watched for at least 15 minutes, I remember looking at the school clock, as I was starting to get bored watching it (hey, I was a kid).

When I’d finally made up my mind to tell someone about this, it was gone. I can’t possibly have been the only one who saw this, yet I have never heard of anyone else who admits to having seen anything unusual.

I was in a cabin near the woods. About 10:30 p.m., outside of my window, I saw a gigantic gold circle with flashing blue, red, and yellow lights. It was at least half a mile away. Other people in cabin saw it, too. It was moving sideways and up.

About 9:30 p.m. I saw an array of hovering red lights through the woods behind my house. Some were blinking. There was no sound. There is no tower or any houses for miles. I watched for about 10 minutes. I’m a nurse and have never seen a UFO and am not even sure they exist.

I was watching The Tonight Show when the cat jumped up to the corner of the window and pushed the drape aside. Curious, I looked out and saw what looked like a 747 going very slow. I went outside to get a better look. The craft was about 300 feet long, going 25 to 35 mph, no noise, maybe 600 to 1,000 feet up. 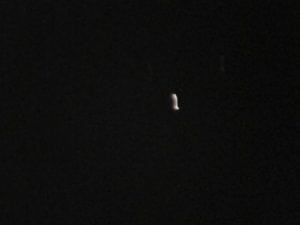 As I stepped outside to the front of my house at 6 p.m. I saw what I thought was the radio tower of Mount Beacon. It started to move slightly, and I thought it was a helicopter. I tried to look through binoculars on a steady point and the object kept on moving around and I am unable to get a clear look. This is going on as I type this.

I was walking my dog at about 10:30 p.m. and noticed a bright light in the northeastern sky. It was too bright to be a plane and there was no sound. This was a bright light resembling a bright star and it was moving in a curving direction. I watched it for about one minute and it disappeared.

I was driving on the Newburgh-Beacon bridge toward Beacon about 10:10 p.m. when I noticed a strange object. What caught my eye were the lights; they were positioned differently than on a plane. As I approached the toll booth I noticed that it was in the same place it had been while I was on the bridge, hovering in place.

Once I got through the toll, I went to turn around so I could try to get a video on my phone, but by then it had vanished. It was triangular, and not much bigger than a small passenger plane.

I didn’t want to be the first person to talk about this sighting so I’ve been scanning the internet for two months hoping someone would post about it. This kind of thing makes you doubt your sanity. About 3 p.m. I was driving east on I-84 when I saw something strange. It almost looked like a derby hat hanging in the sky (I know it’s goofy but that’s what it reminded me of). I could see the bulge in the middle and then what sort of looked like a brim sticking out at the sides.

I was doing 75 mph and it quickly passed in and out of my field of vision because of mountains and hills that the road cuts through. I came around that bend and there in the sky right above the highway was a massive object. As I went underneath, it looked almost diamond shaped and a matte gray. After I passed, I looked in my mirror but it was gone. This all transpired in about 30 seconds. People in other cars around me were also looking up.

When I got to the tollbooth, I asked the collector if she had seen it. Beaming, she said, “I finally saw one.” The weirdest thing, it looked aquatic, almost like a manta ray and had two black circles underneath that looked empty, like holes. It was completely still and silent, and freaked me out. I wondered if it wasn’t a military craft, but the woman at the booth seemed positive it was a UFO. I tried to snap a picture but all I got was the roofline of my car.

Spotted a reddish orange light over Newburgh as I was driving down my street about 7 p.m. It was somewhat stationary and glowed with a slight pulse. It was quite high up. I had watched it for two minutes or so when the red glow faded from a round shape to a triangle with three sections, like looking at an airplane prop. It changed to dull orange like a highway flare glow, then went out. Maybe it was a balloon with a flare attached, of a parachute flare, but I never seen one this high in the sky and I am familiar with flares.

About 10:45 p.m., I couldn’t make out the shape of the aircraft but the lights were in a cross shape, red and white light and some were blinking. It was flying east to west, about five or six lights on the front and two or three on the back. No noise whatsoever. I have been living in Beacon for four months now and have never seen anything fly that low.

After the fireworks at about 10:30 p.m., while in the municipal parking lot, we noticed an orange glowing object moving north slowly over West Point. At one point it remained stationary. Several times it emitted smaller glowing lights from its rear and bottom that appeared to fall and disappear. The object disappeared and reappeared several times over 8 to 10 minutes.

I was driving to work at 11 p.m. and saw a slow plane and a fast plane. The slow plane was too slow, in my opinion. All of a sudden it got brighter and larger, like an extremely bright star about the size of a golf ball. Then I lost it behind the trees and couldn’t find it again.

As I was driving home north on Route 9D, across from West Point, at about 11 p.m., my friend and I noticed a bright light moving slowly. It wandered overhead and looked almost like a hovering rocket. When we turned around further down the road, the craft had vanished. 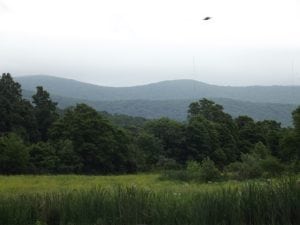 At about 2:10 p.m., I was taking photos for landscaping paintings. When I was looking through my photos that evening, there was an object I didn’t recognize. It didn’t appear to be a bird. Many professional photographers said I should submit the photo to UFO experts.

I was walking into my kitchen at about 11:45 p.m. and noticed an unusually bright white light over Mount Beacon. A series of smaller multi-color lights (red, blue and orange) began moving around the white light. This went on for over an hour, with the lights growing much larger, moving, dancing, and finally disappearing. There’s definitely something happening there.

7 thoughts on “UFOs Spotted in Philipstown and Beacon”