There are few guarantees in life: death, taxes and Haldane softball reaching the sectional finals.

Since 2006, Coach Nick Lisikatos has led the Blue Devils each year to compete for the Section 1, Class C title. On May 26, Haldane was to meet Pawling after a hardfought 4-2 victory on May 24 at second-seeded Tuckahoe.

“The keys for us were solid pitching, solid defense and timely hitting,” Lisikatos said. 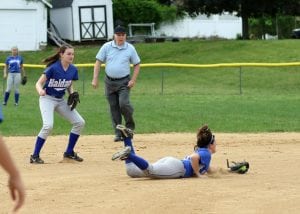 Shortstop Hannah Monteleone snags a line drive in a playoff win over Solomon Schechter on May 22. (Photo by Scott Warren)

Tuckahoe pitcher Cassie McGrath, a senior who has played on the varsity for six years, is one of the section’s best. The night before the game, the Blue Devils took extra batting practice to prepare.

McGrath issued two walks in the first but Haldane was unable to capitalize. Pitcher Shianne Twoguns, one of five freshman starters for the Blue Devils, retired the first two batters on ground balls but McGrath reached on a double and then scored on a double by her catcher, Jess Berger.

McGrath held Haldane hitless for three innings, striking out the side in the second. The Haldane hitters seemed overmatched by McGrath, who mixed in a change-up with her fastball. But Twoguns also pitched well, and it was still 1-0 going into the fourth. 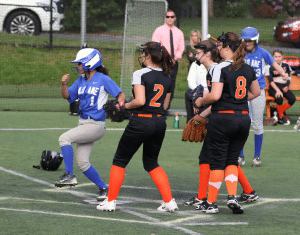 Morgan Toatley recorded Haldane’s first hit with a screaming ground ball deep in the shortstop hole, beating the throw. She would advance to third on a throwing error and ground ball and score on a single by Sabrina Timke.

In the fifth, Olivia Monteleone singled to right and advanced on her sister Hannah’s single. Molly Platt then hit a ball to right center; the two outfielders collided and the ball dropped, scoring one for the Blue Devils. Tuckahoe answered with a run in the bottom of the inning, tying the score, 2-2.

Jazmyn O’Dell led off the sixth with a triple, and pinch-runner Essie Florke raced home on a wild pitch for a 3-2 lead. The final run for the Blue Devils came in the seventh when Hannah Monteleone walked with the bases loaded.

Twoguns struggled to close out the game, throwing six balls in her first seven pitches. After a brief meeting with Lisikatos on the mound, she began throwing strikes, and a line drive back to the pitcher led to a double play. Senior shortstop Hannah Monteleone threw out the last batter for the win.