Loads of Beacon routes to explore for National Trails Day, and more afoot

Since being created by the American Hiking Society in 1993, National Trails Day, on the first Saturday in June, has encouraged hiking, biking, walking and every other muscle-powered, trail-based activity that gets people outdoors.

There is no shortage of places to stretch your legs in and around Beacon, and a number of interconnected and far-reaching routes are in progress. Here is a roundup:

The most notable of Beacon’s already sizeable network of walking and hiking paths is Mount Beacon, the region’s highest peak and one-time Revolutionary War lookout post, with a mile-long trail to its summit.

Located just outside city limits, Mount Beacon Park is maintained by Scenic Hudson and the Mount Beacon Incline Railway Restoration Society. Its trail is rocky and steep, with a number of switchbacks, but the challenge is worth it for the incredible Highlands views. From the peak, you can explore the ruins of the Beacon Incline Railway’s powerhouse or, for seasoned hikers, continue to Fishkill Ridge and the Hudson Highlands State Park Preserve.

Four and a half miles away, on the other side of the city, rests Dennings Point, home of a 1.2-mile loop that closes each winter to become a bald eagle sanctuary. From the trail, hikers and runners can visit abandoned brick factories along the river as well as nearby Dia:Beacon before connecting to the mile-long Klara Sauer Trail, which leads to Scenic Hudson’s Long Dock Park, or, in the other direction, to Madam Brett Park, another Scenic Hudson park.

The proposed route of the Fjord Trail (click to enlarge)

The most high profile of the trails in the works is the Hudson Highlands Fjord Trail that will connect Cold Spring to Beacon — another endeavor spearheaded by Scenic Hudson, this time with more than a dozen partners. The master plan was completed two years ago and Scenic Hudson is conducting environmental reviews of the preliminary route for a public meeting this fall.

The plan is for the trail to have about seven sections: 1) the Cold Spring Metro-North station to Little Stony Point; 2) Little Stony Point to Breakneck Ridge, possibly between the tracks and the river; 3) a half-mile connector from the Route 9D Breakneck tunnel at the Dutchess County line to the pedestrian bridge at the Breakneck train stop; 4) from the bridge, running along Route 9D to Dutchess Junction Park; 5) on state-owned land through woodlands leading to the edge of Fishkill Creek; 6) crossing Fishkill Creek; 7) and connecting to the Klara Sauer Trail (named for a former Scenic Hudson president) and toward Long Dock Park and the Beacon train station.

In all, the Fjord Trail will run between 7 and 9 miles, with some construction near Breakneck Ridge expected to begin later this year, said Scenic Hudson planner Amy Kacala.

Coupled with the vision for the trail are plans to expand and pave the Breakneck Ridge parking lot, to create parallel-parking spaces along 9D and to enhance pedestrian crossings. The state Department of Transportation has been asked to reduce the speed limit near Breakneck from 55 to 40 mph and to institute additional traffic-control measures, she said.

While no timeline has been established for a proposed North Hudson Trail, Beacon officials are finishing a feasibility study to have it extend from the north end of the Beacon Metro-North station (nearly connecting with the Fjord/Klara Sauer) and run to the Town of Fishkill line near  the Newburgh-Beacon Bridge. 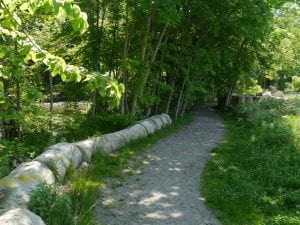 The Fishkill Creek Greenway & Heritage Trail is being opened in segments around Beacon. (Photo by J. Simms)

In 2013 the Beacon City Council adopted a master plan for the Fishkill Creek Greenway & Heritage Trail, another continuous trail proposed to run from the Beacon train station to Fishkill Creek at Madam Brett Park. From there it would continue, stretching just over four miles in all, along the western shoreline of the creek and following it to the Fishkill line on Beacon’s east side.

At 10 a.m. on Saturday, June 3, the Beacon Greenway Trails Committee will celebrate National Trails Day with a ribbon cutting to mark the two most recent segments to be added to the Greenway — which is being created section-by-section with help from developers building in the Fishkill Creek corridor.

The first new segment extends from the cast-iron bridge at Bridge Street to the rear parking lot at the Lofts at Beacon development. The second picks up at the parking lot and connects to the Beacon Gorge near Route 52.

“This is a chance for the city to set aside something that’s already there, in the creek and the structures there along it, and to elevate it together into a key component of the city’s character,” said Thomas Wright, a member of the Greenway Trails Committee, which first approached the City Council in 2009 with the idea of a creekside trail.

Although no official agreement is in place, Fishkill officials have said they plan to extend the North Hudson Trail and the Fishkill Creek Greenway & Heritage Trail north. 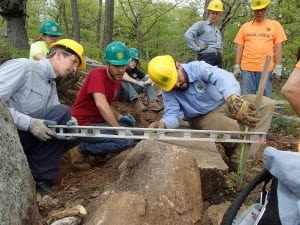 The Megalithic Trail Crew, which welcomes volunteers five days a week from June to October on the Appalachian Trail in Bear Mountain State Park, this year will continue work on a 5-foot-wide stairway to the top of the mountain. Over the past decade, more than 1,000 stone steps have been built. (Photo provided)

Finally, the Metropolitan Transportation Authority issued a “request for expressions of interest” last fall for the utilization of the almost 28-mile dormant rail line from the Dutchess-Putnam county line to Beacon.

Although it received eight proposals, the MTA said it plans to instead focus on Gov. Cuomo’s proposal to improve and expand a multi-use trail network known as the Empire State Trail across New York state. According to the agency, Metro-North therefore has no immediate plan to take action on any of the proposals for the Beacon Line, but the Empire State Trail could preserve the rail corridor along the route.