Prompted by a wager, playwright wins big with Jane Austen

It’s almost like a scene from a Kate Hamill play, replete with one of her trademark sort-of-sure-of-herself heroines: a creative young woman wagers more than she can afford that, although she has no prior experience, she can write a theatrical adaptation of a much-admired literary classic written some two centuries earlier.

The wager was won. Hamill not only wrote an adaptation of Jane Austen’s Sense and Sensibility, but a few years later finds herself much lauded and frequently produced in the genre of “new classic works.” 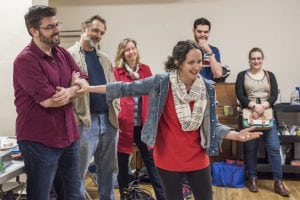 Kate Hamill (center) discusses her adaptation of Pride and Prejudice at the first rehearsal in April for the HVSF production. (Photo by Ashley Garrett)

Her latest, a retelling of Austen’s Pride and Prejudice, will be performed with Hamill in the lead at the Hudson Valley Shakespeare Festival, which has nurtured all of Hamill’s full-length plays. Her adaptation of Thackeray’s Vanity Fair recently concluded an extended run at the Pearl Theater in Manhattan.

The frustration behind the wager stemmed from Hamill’s experience as an actress. Trained at Ithaca College, Hamill was dissatisfied with the roles available for young female actors, such as Bikini Girl No. 2 or the non-speaking   girlfriend of a male artist.

“I loved the classics, but even in Shakespeare there are 16 male roles to every female,” she says. “Most contemporary playwrights are male and they tend to write from their perspective. I was seeing so many incredible female artists dropping out because there was no work.

“I decided I wanted to create new classic work, but not just for me — I wanted women-centered stories. So I bet a friend I could write an adaptation of Sense and Sensibility.” The adaptation, produced by the Bedlam Theater Company, was a smash in Manhattan last year and is becoming a staple at regional theaters.

Until now, Hamill’s plays have been presented by HVSF as staged readings, which the playwright says are an essential part of the process.

“Plays don’t exist on the page for me, they exist on the stage,” she says. “To have it put in front of people and see the reactions: laughing, coughing, where are they restless? — is integral to figuring out what works. I’m someone who likes to overwrite and cut down.” Between a reading of Pride and Prejudice as part of the HVSF2 series in August and later at Seattle Rep, about 20 pages have been shed. 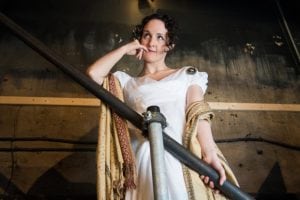 Later this summer, Hamill will again debut a work at HVSF2. She’s leaving the drawing rooms and venturing out into the great wide world with an adaptation of Homer’s The Odyssey.

“It’s crazy to take it on maybe, but it’s important to hurl yourself against the wall sometimes,” she says. She particularly enjoys writing the exchanges of boatloads of sailors who sound like Americans. “It’s an American play using American speech patterns,” she explains. On the side, she’s adapting Little Women.

Hamill considers her adaptations “a collaboration between me and the author. I’m determined to make it my own and put my own spin on it, because there’s no reason for adaptations without a point of view.”

With source material such as Pride and Prejudice, “people come in with an emotional attachment to the characters,” she says. “That can be to your benefit, but  you can also desecrate their idols. I try not to worry about it too much. I hope people will be pleasantly surprised and be willing to engage, realizing that the bones that we all love in the story are still there.” 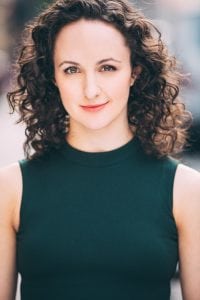 Growing up in a dairy farming town in the Finger Lakes, Hamill was a “sensitive, high energy child who didn’t do well under normal schooling conditions — I chafed,” she recalls. Theater became an outlet, but her writing talent did not surface until after college.

“I read a lot but never thought of making my own work outside of skits, probably because I didn’t see any examples around me,” she says. “When I graduated, they told me ‘Be prepared — you won’t work until you’re 30’ because I wasn’t the type of person who, when she walks into an audition, they just know what she’s right for. I was little and character actress-y, and as a result I played a lot of animals and weirdos.”

Though the time devoted to crafting plays has cut into her acting, Hamill says it’s been well worth it. “It’s rare enough as a woman to be produced, let alone to appear in your own work,” she says.

Pride and Prejudice opens at Boscobel on June 10 and runs through Aug. 31. The Odyssey will be performed at the Philipstown Depot Theatre in Garrison on Friday, Aug. 11. For tickets, visit hvshakespeare.org.