A Beacon business owner is due in court on June 22 to face accusations by the city that he hung an unauthorized sign on a building he owns, but he says the sign is art.

Jason Hughes, who, along with his wife, Carley, owns and operates Ella’s Bellas at 418 Main St., was cited by the city in May for refusing to remove an acrylic-on-wood painting outside of his establishment. While he faces more than $30,000 in fines, Hughes says he hopes the conflict will spur a discussion about what constitutes art in a city known for it.

In February, Hughes hung an 8-by-34-foot banner on his LNJ Tech Services warehouse at 4 Hanna Lane that read “No Hate! No Fear! Everyone is welcome here.” The banner — a commentary on a “sanctuary city” resolution being considered by the City Council — attracted considerable attention, but it’s not what got him into hot water with the city. 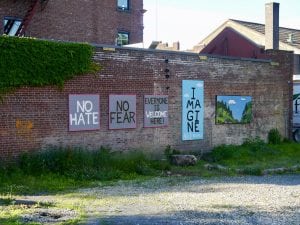 The Beacon Building Department is disputing whether the Imagine painting at 418 Main St. is art or signage. The three paintings to the left are new. (Photo by J. Simms)

Instead, Hughes says he’s being penalized — to the tune of a $1,000-per-day fine backdated to May 10 — for a painting by Beacon artist Rick Rogers that quotes the John Lennon song Imagine.

About six weeks after the “No Hate” banner was hung, Hughes says he received a notice from the Building Department that the banner, as well as another underneath, exceeded size regulations. In response, Hughes moved the “No Hate” banner from Hanna Lane to the west side of the Ella’s Bellas building, near the intersection of Main Street and Schenck Avenue.

At that location, the banner partially covered two Rogers paintings installed on the building in February, one of which quotes the Lennon song against a sky-blue backdrop.

On May 5, the Building Department told Hughes the banner was still in violation at Ella’s Bellas. It also charged him with having two signs on the building, a violation of the zoning code. Hughes took down the banner, as well as an Ella’s Bellas sign from the front of the building. Rogers’ paintings, both now visible, stayed up.

On May 15, Hughes received a criminal summons for “affixing more than one sign” to his building. According to court  documents, the signs were the “No Hate” banner and “a blue sign with black-and-white lettering” — presumably the Imagine painting.

As with most regulations, there is room for interpretation. Beacon’s zoning code allows one sign on the outer wall of structures in nonresidential districts. It also regulates size, placement and other factors. The “No Hate! No Fear!” banner at its second, temporary
home at Ella’s Bellas before its removal last month (Photo by Amy Soucy)

At the same time, a public-art ordinance defines visual art that can be displayed in public as including “paintings of all media, including both portable and permanently affixed works such as frescoes and murals.” Further, it mentions sculptures and “artist-designed landscapes and earthworks, including the artistic placement of natural materials and other functional art objects,” among a handful of other mediums.

Hughes’ citation, however, is based on the zoning ordinance, which is “valid and content-neutral,” and applies to private property, says City Attorney Nick Ward-Willis. “Municipalities routinely use their zoning laws to regulate the time, place and manner in which signs may be erected, and that is precisely what the city is doing here,” he said, adding that the city hopes to “amicably resolve” the matter before the June 22 court date.

Although the issue is not within the purview of the City Council, a number of residents spoke out at its June 5 meeting.

“How can government declare what is art and what isn’t art?” asked David Ross, former director of the Whitney Museum of American Art and the husband of council member Peggy Ross. “It’s a very dangerous thing to do.”

Hughes said on June 6 that others have received signage approval for artwork, but he’s not willing to go that route.

“I’m calling on City Council to affirm the rights of private property owners to display art, as well as an affirmation of the difference between art and signage,” he says. “My goal is to protect the rights of artists and artist-supporters, not to attack a valuable part of Beacon’s structure. There’s room for both valid code enforcement and a vibrant artistic community.”