First novel for Garrison writer, author of Agnes of God

There’s no requirement to tell a story through dialogue. No page limit, nor time limit and no one looking over his shoulder. These are some of the positives for John Pielmeier in shifting away from his usual script-writing, instead trying his hand at a novel. Hook’s Tale: Being the Account of an Unjustly Villainized Pirate Written by Himself, Pielmeier’s first novel to be pulbished, is being released by Scribner on July 18. A publication party to benefit the Garrison Art Center, with Pielmeier reading from his work, takes place at the appropriately nautical Garrison’s Landing on July 15. 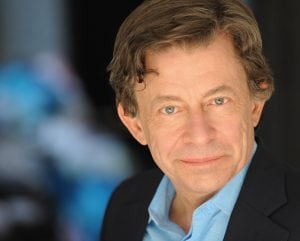 A first-person narrative account of the youth of Peter Pan’s nefarious nemesis, Hook’s Tale reflects Pielmeier’s long interest in both the story and its creator, Sir James Barrie. As he relates: “I’ve been fascinated with Peter Pan since I was a child. I have a childhood memory that it was the first movie and the third movie I’d ever seen.” Beyond the films, however, were the written versions of the story.  That’s versions in plural because Barrie wrote about Peter Pan formally four times, beginning with a story within a novel. That story was later published separately, with color illustrations, as a children’s book.

Intersecting, providentially, with Pielmeier’s long fascination with Barrie and Peter Pan, was a South Seas cruise he and his wife, poet and playwright Irene O’Garden, took from Chile to Tahiti. It was at Robinson Crusoe Island, where Alexander Selkirk was marooned from 1704-09, that Pielmeier unexpectedly found inspiration. Hiking on a trail leading to the top of a mountainous ridge dividing the island, Pielmeier felt a twinge of familiarity as he realized that Selkirk had:

“…probably described the island to a London reporter who created a rough map; 2) the map thus created had in turn inspired Defoe; 3) the map that Defoe created in turn inspired Robert Louis Stevenson in drawing the map of Treasure Island; and 4) Stevenson’s map had in turn inspired J.M. Barrie when he was creating Peter Pan. This was pure speculation on my part, except that the proof lay before me: there in the mouth of the bay lay Hook’s ship, and later, when we topped the ridge of mountains, we could easily spot Mermaid’s Lagoon to the west and the promontory holding Tiger Lily’s village far to the north. I was walking through Neverland … I then began to wonder where Hook sailed when he wasn’t anchored off of Neverland. For that matter, how did he get to Neverland? What was his story?”

Hook made his first appearance in Barrie’s third iteration of the story, which was a play, produced in 1904, titled Peter Pan, or The Boy Who Wouldn’t Grow Up. Not yet a focal point in the early drafts, the pirate captain was created for a “front cloth” scene to be staged in front of the curtain while the set was changed from Neverland back to the nursery, depicting the children’s journey. Barrie expanded upon that as he fine-tuned the play, and Cook wound up as a main protagonist.

The novel, Peter and Wendy, came seven years after the play, and proved to be Pielmeier’s main research source. 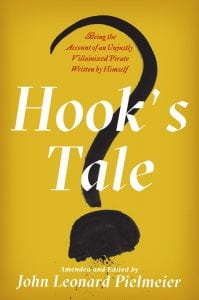 Once Hook got into Pielmeier’s brain, the ideas and questions started flying. He began looking for answers in Hook’s youth. “Hook starts out at age 13. His father, he has been told, is a sea captain who died at sea. Hook is out to find his father’s family. He inherits a book and finds in it a treasure map, which leads him to the Never Archipelago … nothing is what it seems in this Dickensian tale of transformation … sympathies we once held for a boy who refused to grow up may now shift to a one-handed fellow who seeks the courage to face death.”

The model of this book for Pielmeier was Treasure Island, written by another of his favorites, Robert Louis Stevenson. Some of Hook’s Tale is set at the Admiral Benbow Inn, a Treasure Island locale. Nevertheless, it’s Barrie’s tale all the way, and Pielmeier knows a lot about its creator.

“Barrie is often discussed as a boy who never grew up, but that’s a misinterpretation. When he was 6 years old, his brother David was killed in a skating accident. His mother took to her bed for 27 years. Barrie, at 6, realized that his brother was his mother’s favorite child.  David is really the boy who never grew up, and stayed forever 12 years old.  Barrie identifies himself as Hook.”

Pielmeier’s own childhood was more prosaic. Growing up in Altoona, Pennsylvania, there was never any doubt in his mind that he would be leaving. “It was isolated, surrounded by mountains. I never thought I would stay; it was ‘I’ll grow up and I’ll leave here.’” He accomplished this departure after college and grad school through acting, doing seasons at Milwaukee Rep, then Actors Theatre of Louisville and the Guthrie in Minneapolis.

Moving more into writing, Pielmeier then relocated to New York City, where soon he experienced great critical and commercial success with his play Agnes of God. He has rarely acted since, but relished doing the audio book recording for Hook’s Tale himself. He calls the shift from acting to writing “sort of gradual,” but it has led to a long, successful (many credits, three Emmy nominations) career as a script writer, with much work created for television.

As he puts it: “Having your first play become so successful means that you’re always dealing with so much hope for all your projects. I want everything I write to be successful, but sometimes you’re right, sometimes you’re wrong.” At times Pielmeier wishes he had received more opportunities to write for film or theater. But overall he is sanguine about it, stating that “I wouldn’t have had so many of my scripts produced in the feature world, and getting that green light is an important thing in any writer’s life.”

That green light was just given to Pielmeier’s theatrical adaptation of The Exorcist, opening in London’s West End this fall, after a very successful recent trial run at a theater in Birmingham, England. 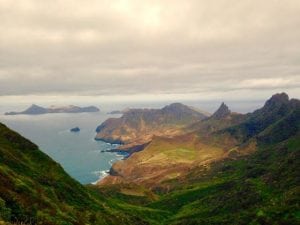 It was royalties from Agnes of God which brought Pielmeier and O’Garden to the Highlands, back in 1984. “The Agnes money allowed us to choose this area.  We had lived in the city and didn’t want to anymore, so we moved to Cold Spring and lived there for 12 years before buying our current home in 1996. What’s interesting is that Irene and I spent our wedding night at a B&B that was then on Garrison’s Landing, little knowing we’d eventually move here. And then the house we now live in belonged to Kenneth Frazier, a painter. When we bought it I said, ‘I bet we find some of his paintings.’ And then, in a closet, the workmen found seven unstretched oils. One of them was a painting of the place where we spent our wedding night.”

There will be a reading and book signing, together with dinner and cocktails, to benefit the Garrison Art Center, at 6:30 p.m. on July 15. (See details at garrisonartcenter.org.) There will also be a book launch and talk on July 20 at 6:30 p.m. at the General Society of Mechanics & Tradesmen of The City Of New York, 20 West 44th St. This event is free, but registration is required at eventbrite.com.