The last time Carin Jean White showed her paintings at The Catalyst Gallery in Beacon, a number of friends came from the city to the opening. Knowing that she is a theater director as well as a visual artist, they told her of the connection they saw in her work between both pursuits. She saw it, too, she says, but not before it was pointed out.

Growing up in a Bay Area household where art supplies were always lying around (courtesy of her father, a graduate of the Art Institute of San Francisco), White was often found crafting dioramas. At the same time, she began acting in plays at age 4 and directed her first play in high school. Plus, she was interested in science. 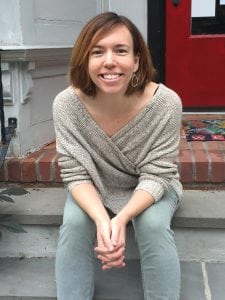 All of these elements come together in the Cold Spring resident’s current work, much of which is interdisciplinary, drawing upon site-specific questions, applications of design extending to sound, consideration of spatial qualities and other strands of exploration.

Her latest Catalyst show, which opens with a reception from 6 to 9 p.m. on Saturday, Aug. 12, is her third in the space. While it focuses on her painting, most of her work rests at the intersection of theater and visual installation.

“I’ve always been interested in various forms, though all my formal training is in theater — it’s been the through line,” says White, who earned a master’s degree in directing from Columbia and teaches expository writing there. She finds it “a great way to gain another perspective on parts of the human experience that are puzzling.” 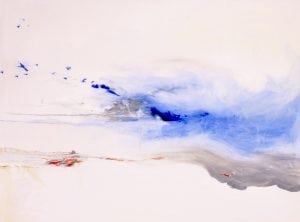 White is attuned to the use of space. “When I began to pursue directing, I thought I wanted to learn about space,” she says. “I went to a program that allowed me to study direction and design.” She didn’t do scenic design until later in her directing career but says it began drawing closer to her artistic work beginning with her play, Rivers and Tributaries. The play asks whether fear can be a catalyst for the creative process, she says. “I did the scenic design, and the play also had dance sequences and a photography project layered into it. It was a shift in my work. I found it exhilarating and fulfilling.”

That experience, she says, led to “a series of pieces, devised or scripted, and some site-specific and street theater, asking, how do we use space in storytelling? How can we re-contextualize architecture for an audience?”

At the same time, she began painting, triggered, in part, by the tough moments of writing. “I discovered a method I enjoyed,” she recalls. “If I was hitting speedbumps in a script, I could work on a painting, and just doing something physical allowed me to be more intuitive. I was also able to shift between my gut and my training. It allowed me to let images bubble, and not get fixated; to pause, step back.” 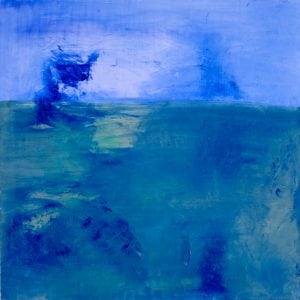 Since Rivers and Tributaries, which was produced in 2011, White has worked as the resident director during Spiegelworld’s tenure in New York City, its tent hosting Empire, a reinvention of circus and cabaret traditions in a variety show. She also was asked by the Prague Quadrennial Theatre Festival to create a show, Secret Life, which explored the history of the city through allegory, dance and installation.

In addition, she directed, adapted and designed a production called Hamlet CU3ED for Access Theatre in New York City and she conceived and directed Dealing with Ophelia, using Governor’s Island as a vision of Hamlet’s Denmark with mimes, music and water balloons.

For a more recent project, Earthsong, White created permanent visual and sound installations at Earl W. Brydges Artpark State Park in Lewiston, New York. Based upon conversations White recorded with Haudenosaunee Native Americans, the sound installation was placed on a newly created path near a burial mound. As visitors walk through the installation, they hear layers of sound from speakers camouflaged by bark, including voices and the river, cicadas and wind, to be reminded of those who came before, she says. 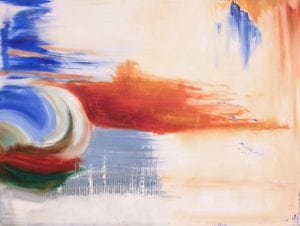 Rivers and Tributaries brought White to Cold Spring. During the New York City performances, the village “always felt like a good place to get centered,” she says. “I began thinking that if I moved here I could be in the city for a few days each week but also have a mountain!”

White rented for four months on Market Street. “I loved looking at the barges” on the river, she says. “I started writing, and didn’t want to leave.” In Beacon on Second Saturdays, she met several gallery owners, and Erica Hauser of Catalyst expressed interest in her art. “What I love most about showing in a gallery is the conversations,” White says. “They help you gain insight on what you are making.”

White’s paintings will be on view at Catalyst, at 137 Main St., through Sept. 4. See carinjeanwhite.com.