Two Beacon residents are hoping to bring skateboarding back to the city in a big way, and the city is on board — no pun intended.

Luke Conway, 29, and Joe Linksman, 30, are partnering with the Beacon Recreation Department to build a skateboard park at Memorial Park. Plans call for converting several little-used tennis courts in the park’s northwest corner.

“There’s such a community here of people who grew up skating and want their own kids to grow up with it, too,” Conway says. “But they don’t have any place to ride.”

Mark Price, Beacon’s recreation director, says the idea of constructing a skate park has arisen from time to time, “but you need a community to drive a project like this. These guys have carried the baton farther than anyone else.” 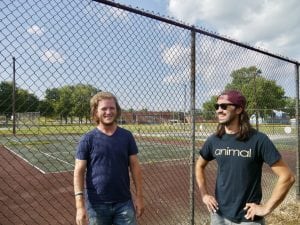 Joe Linksman and Luke Conway are working to create a skateboard park at Memorial Park in Beacon. (Photo by J. Simms)

A similar project in Newburgh was proposed to the City Council in 2013 by a group of skateboarders but not approved until this past July. The facility, budgeted at nearly $500,000 and funded in large part by state grants, is expected to open in November at the Delano-Hitch Recreation Park.

Conway and Linksman appeared before the Beacon City Council in July to formally propose a park but had been working behind the scenes for several months with Price and Mayor Randy Casale. Now they’re awaiting site prep from the Recreation Department before launching a campaign to fundraise and get the public involved.

“It’s going to be a true community project,” says Linksman, an environmental attorney who doesn’t skate but was inspired to get involved after hearing Conway speak at a public forum about the need for a park. “We’re going to raise the money ourselves, do the construction ourselves and maintain it ourselves. Once we get approval we’ll start gathering sponsors and volunteers.”

Conway, who works in conservation, said there was no skating scene in Beacon when he moved to the city in 2012. But in the five years since, he said, there has been an “influx of people” who ride. 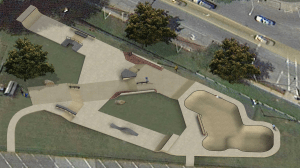 In 2014 Newburgh contracted a skate park construction firm to create a design, shown here. After years of discussion, the $479,850 project was approved by the City Council in July and should be completed by November. (Grindline Skate Parks)

Beacon had a skate park years ago, but participants could only use it when a “gatekeeper” with a key was on duty. After it closed, skateboarders began congregating at the old Tuck Tape factory building near Madam Brett Park and Fishkill Creek. A fire last winter shut down skateboarding at the factory, which was never a long-term or particularly legal option, anyway.

In April, Conway spoke about the need for a park at a “Citizen Soapbox” at First Presbyterian Church. Linksman was there, he said, as an organizer of the event, but also to find a project to jump into (or onto).

“This is the one that hooked me,” he said. Despite not being a skateboarder (though Conway is working to change that), Linksman says he “liked how excited so many people got, and so quickly. It’s been a ton of fun attending meetings with the mayor talking about a skate park. I don’t know of anything cooler than that.” 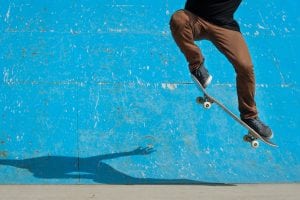 A skateboarder performs an “ollie.” (Shutterstock)

With the opening last fall of refurbished tennis courts at South Avenue Park, the Memorial Park space can be repurposed, said Price, the recreation director. About two-thirds of the space will be used for the skate park and the remainder for batting cages for the Beacon High School girls’ softball team. A fence will separate the two.

“Once we get the surface prepped, they could drop in some modular ramps,” Price said. “Then we’ll see the major construction in the spring.”

Conway and Linksman have selected a contractor for oversight but say much of the construction will be done by volunteers. They hope to build a half-pipe (possibly a mini) as well as several smaller ramps suitable for BMX biking as well as skateboards.

Helmets will be required, with elbow and kneepads recommended. Like other teams that play volleyball or basketball at Memorial Park, participation will be at your own risk, and entrance will be free.