This year’s Beacon Independent Film Festival will open with the Hudson Valley premiere of a new documentary by director Rachel Shuman, who moved to Beacon in 2014. Titled One October, it was filmed in October 2008 but, in part because it ruminates on change and time, Shuman let it marinate for eight years.

The result, which will open the annual festival at University Settlement Camp on Friday, Sept. 15, is a celluloid time capsule of the period just before President Barack Obama’s first election victory and a particularly active period in New York City’s ever-changing landscape. 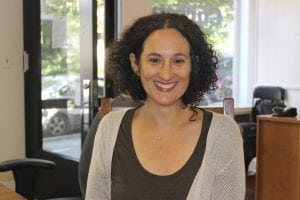 Rachel Shuman (Photo by A. Rooney)

The 56-minute film translates easily to 2017, quietly raising touchpoints about development that many cities, including Beacon, are facing.

The Sept. 15 screening will be followed by a panel discussion of urban planners, developers and activists moderated by Cassim Shepherd, who teaches architecture, planning and preservation at Columbia University. As the founding editor-in-chief of Urban Omnibus, a publication of the Architectural League of New York, he spent six years working with hundreds of architects, designers, artists, writers, and public servants on urban innovation.

Shuman’s documentary follows a WFMU radio reporter known as Clay Pigeon, who has hosted The Dusty Show, which features interviews and eclectic music, on the freeform station since 2005. In One October he meanders around New York City engaging people in off-the-cuff, sometimes highly personal conversations about their lives, their relationship to the city and how they see the city’s future. Although the impending 2008 election is frequently invoked, the focus is on the state of flux that every city is always, to some extent, going through. 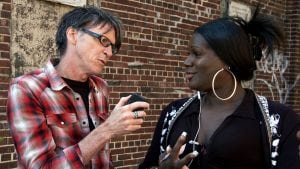 Clay Pigeon, left, talks to a resident in the West Village in 2008. (Photo provided)

“The timing is important in as much as politics informs your daily life,” Shuman explains, “but not necessarily more than that.”

Waiting eight years to release her documentary was not Shuman’s plan. But after the filming was completed, she realized it needed more distance.

“I started to think of it as a time capsule,” she says. “I thought it should come out at the end of Obama’s term and ask, ‘Was it all what we thought it would be? Where are we now?’ ”

The fifth annual Beacon Independent Film Festival runs Sept. 15 to 17. For a schedule, visit beaconindiefilmfest.org. Movie blocks start at $12, or a three-day pass is $35. See brownpapertickets.com. All screenings are at the University Settlement Camp, 724 Wolcott Ave., unless indicated.

Failed Institutions (1 p.m.), including That Way Madness Lies, in which a woman and her family attempt to save her brother as he descends into untreated schizophrenia.

Comedy (4:45 p.m.), including Black Cat, in which Duke Moody decides to make a true-crime documentary financed by his mother.

Fighting for Family (7:30 p.m.), including Quest, a documentary portrait of a family living in North Philadelphia and the creative sanctuary offered by their home music studio.

Young Filmmakers (10 a.m., free), including Sunrise Storyteller, in which Kasha Sequoia Slavner sets out on her 16th birthday in search of stories of hope and resilience.

Art (12:45 p.m.), with art created from start to finish, a profile of artist Donna Mikkelsen, and five short films.

Family Dynamics (3:30 p.m.), including Supergirl, a documentary about a 9-year-old Orthodox Jewish girl who is a competitive weightlifter.

Finding people to interview was a spontaneous process. For the most part, it involved trailing Clay Pigeon. Shuman, who lived in New York City for 18 years before moving to Beacon, knew to train her cameras on particular events such as the Columbus Day Parade and a Blessing of the Animals service. But other shots were obtained by happenstance, such as the street-theater protests on Wall Street following the 2008 bailout.

After growing up in a Boston suburb, Shuman lived in San Francisco while an undergraduate at the California College of the Arts, where she studied drawing, sculpture and photography. She also had a love for books, which led her to a publishing program at NYU and to the art books division of the Guggenheim. While obtaining a master’s degree from the School of Visual Arts, she drifted from photography to film and video. 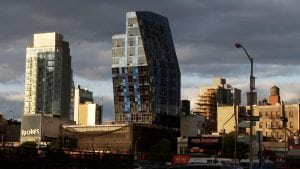 New towers rise over the Lower East Side in 2008. (Photo provided)

“The bells went off, it clicked and I felt at home,” she says. “I particularly fell in love with film editing. I found it creative and analytical at the same time.”

Schuman’s first film, Negotiations, premiered at the Tribeca Film Festival in 2005. It chronicles the relationship of an interfaith couple during the ninth months they are expecting their first child. Shuman’s husband, David Sampliner, is also a filmmaker and was the cinematographer for One October.

Shuman is excited to show the film in her new hometown. 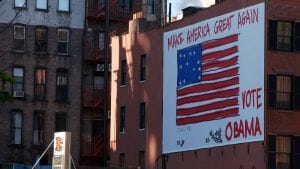 “Even in the seven years I’ve been familiar with Beacon [since her first visit], there’s such a difference between now and what it was when we first saw it,” she says. “There’s accelerated development, including a huge building on Main, that reminds me of something similar on the Lower East Side when it felt like a spaceship had landed. So much hasn’t been considered about the history of the place.”

She says she isn’t against development but feels it’s a loss whenever gentrification displaces a population. “In order for a city to thrive it needs the same diversity as a wildlife eco-system,” she says. “When you don’t get to know people outside your sphere, you don’t learn from each other and repercussions trickle down.”