A years-long campaign by the Beacon Historical Society to restore the historic Tioronda Bridge in Beacon has received a boost from the New York State Department of Transportation, which awarded the project $500,000. 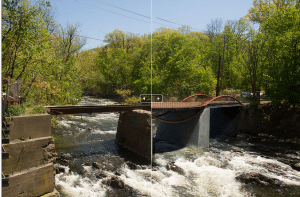 A concept for the bridge (General Idea)

Frank Skartados, a Democrat who represents Beacon in the state Assembly, informed the City Council of the grant on Sept. 5. He also pledged to help Beacon find money for the balance of the project, which is expected to cost upward of $1 million.

The grant “should go a long way toward getting this project off the ground,” Skartados said, adding in a statement that the Tioronda “isn’t just another bridge — it’s one of the most scenic places in Beacon. With Beacon growing the way it has, this haven for enjoying nature is needed now more than ever.”

Built around 1870, the 110-foot, three-span bridge, also known as the South Avenue Bridge, crosses Fishkill Creek and originally linked water-powered mills and factories with rail lines in Fishkill. If rebuilt, it would connect residential neighborhoods with Madam Brett Park and recreational trails south of the city. 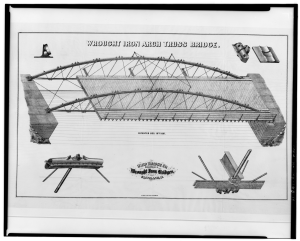 The iron bridge, which was 16 feet wide, was listed on the National Register of Historic Places in 1976, the first bridge from Dutchess County to be recognized. After falling into disrepair, it was closed to traffic in 1985 and disassembled in 2006. The trusses were eventually placed against a fence at the Beacon Transfer Station.

Before being taken down, the bridge was a “rare surviving example of the iron bowstring arch-truss bridge” built in the years after the Civil War, according to the application for it to be named a national landmark. It was built by the Ohio Bridge Company of Cleveland, a small firm that closed in 1873. The bridge design was only thought to exist on the 1867 patent until the Tioronda was “matched” to it in 1973. A bridge in Allegheny County, Pennsylvania, is the only other known example. 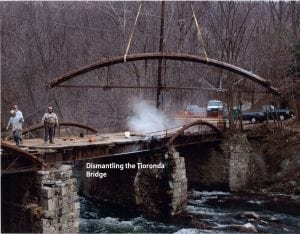 The bridge being dismantled in 2006 (Photo by John Fasulo)

The idea of rebuilding the bridge has come up many times, with the City Council last year contracting with the Modjeski and Masters engineering firm to design the project. Council members also have debated whether the bridge should be rebuilt for one or two lanes of traffic, along with room for pedestrians, while police and fire officials have expressed concern that the bridge be wide enough for emergency vehicles. Skartados — crediting Beacon council member Lee Kyriacou with the assist on seeking out alternative designs — proposed that it be rebuilt with a walkway and one lane of low-speed vehicular traffic.

The Beacon Historical Society, which produced an online video (below) that reviews the structure’s history and significance, was relieved to see progress on what it called, in 2015, “a preservation story waiting for a happy ending.” Vice President Theresa Kraft said on Sept. 14 that the group was “thrilled that initial funds have been secured,” saying it envisioned the bridge as a “heritage destination.”

The city is researching additional grants, Beacon Administrator Anthony Ruggiero said. The state funding should help attract additional money because it increases the likelihood the project will be completed, he added.