In a document dated Sept. 11 and preserved at the Putnam History Museum, six investors — including Gouverneur Kemble, a New York City merchant who organized the effort — agreed to create “an iron foundry by the name of the West Point Foundry” in Cold Spring. 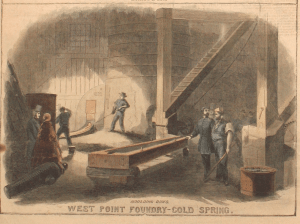 Earl Osborn of Garrison, who was wounded in France while rescuing other soldiers, was awarded the War Cross for bravery. He was recuperating in the American Hospital in Neuilly.

Two 13-year-old girls from New York City who were visiting the home of John Vleck in Garrison drowned at a pond at the Fairfield Osborn place. Apparently one girl had been seized with cramps and the other tried to save her.

James McCarty, 80, a native of Garrison who now lives in New York City, spent a few days in Cold Spring. He walked to Garrison and reported “that owing to the excellent condition of the Garrison road, I made as good time Thursday as I did 50 years ago, when the road was not so well adapted for travelling.”

The Cold Spring Village Board of Trustees condemned the actions of Officer Andrew Reilley, who, acting as Town Constable, took a prisoner from the jail in Town Hall to the polls so the inmate could vote in the primary election. In his defense, Reilley said he was not acting at the time as a police officer, because he only works for the village from 4 p.m. to 4 a.m.

The management of the New Hudson Theatre said that rumors that it had caught fire were false and that “the public will be given top motion picture entertainment in safety and comfort.”

The board of the Philipstown Community Center agreed to accept the gift of a 1941 Buick town car from Mrs. Lawrence Bayne of New York City to be converted into an ambulance.

The junior members of the Hand-to-Mouth Players presented Gilbert and Sullivan’s The Mikado at the Garrison Depot Theatre.

Frank Lyden, who retired and moved to Florida earlier in the year after serving for 18 years as Putnam County sheriff, died at age 72.

A tugboat was called to Manitou to release an empty  217-foot oil tanker whose bow had been driven 50 feet onto the shoreline property of a resident. The ship’s captain was arrested for drunk piloting and fined $15.

A team sponsored by Sullivan’s Nursing Home clinched the Philipstown Softball League title, its sixth in a row.

Michael Carufe of Cold Spring, who had been employed at the Matteawan State Hospital in Beacon for 10 years, was named its Psychiatric Aide of the Year.

Officials from the Hudson River Valley Commission met at Our Lady of Loretto with Father Tull and Father Grace to discuss restoring the Old St. Mary’s-on-the-Rock Chapel on the Hudson River.

The Garrison Volunteer Fire Company opened its new station on Route 9, built on 1.5 acres donated to the department about 20 years ago by Graymoor. The station was dedicated to the charter members who founded the company in 1929.

Six Cold Spring teenagers were charged with 33 counts of petit larceny, criminal mischief and possession of stolen property after a “scavenger hunt” resulted in the loss or damage of a number of mailboxes and signs in the village and Garrison. A few items were recovered near the Breakneck tunnel.

The Narcotics Task Force of the Putnam County sheriff reported that in the first six months of 1992 it seized more than seven pounds of cocaine with a street value of $1.5 million.

Cold Spring Village Board members complained they had not been informed of a deal by Hudson Valley Hospital to sell the Butterfield Hospital property to Paul Guillaro of Unicorn Contracting for $2 million. Mayor Anthony Phillips said he had no idea what Guillaro planned to do with the site.