Arms Acres’ new opiate outpatient treatment center is in a low-slung former Comcast office on Old Route 6 in Carmel. It opened June 30, but unless you’re looking for it, the facility is easy to miss.

Once part of the inpatient/outpatient rehab center on Seminary Hill in rural Carmel, the Old Route 6 center is the first standalone methadone clinic in Putnam County.

Psychiatrist Timothy Rowe and his colleagues decide which of the “three pillars” of treatment — methadone (a liquid), Suboxone (a film placed in the mouth), or Vivitrol (a shot) — patients will receive, based on their medical histories. To qualify for Vivitrol, for example, a patient must be clean for 10 days.

Many patients rebuild their lives with substitute opiates such as methadone, Rowe says. “And most people aren’t going to bother to abuse [Suboxone] because it is not that rewarding,” he says.

Rowe says he is hopeful about Vivitrol, because it isn’t potentially addictive like substitute opiates and only needs to be injected every 28 days. Other non-opioid addiction drugs are in the pipeline but may not be available for years. But if successful, they could be blockbusters.

One, under development at the Scripps Research Institute, uses the immune system’s virus-rejection mechanisms to fight opioids as foreign bodies. Another, the brainchild of researchers at the Walter Reed Army Institute of Research, prevents heroin from reaching the brain and also may protect against HIV infection.

Patients come to Arms Acres from a hospital or other detox centers, explains Steve Witte, clinical director of the outpatient facility. When they arrive, they are examined by Rowe, who is also a neurologist and addiction psychiatrist. The new outpatient center has 200 slots, of which 15 were taken as of late August. The center hopes someday to treat hundreds more. 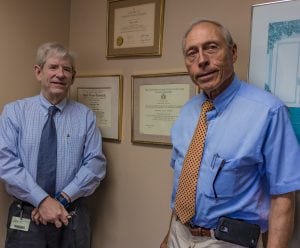 Many patients arrive at the center “anxious, angry, difficult, obnoxious,” Witte says. “After we help them withdraw, their personality emerges and then you sometimes have this lovely person who is interested in recovering, as well as helpful to others. It is a transformation that is truly magical.”

Withdrawal is tough mental and physical work. A patient’s health may be compromised after years of neglect, including their dental health, says Rowe. Those addicted to painkillers after injuries often have to endure physical therapy, too. The doctors, nurses, social workers and case workers at Arms Acres meet twice a week to discuss each patient and his or her progress.

“Part of our intake is making sure all patients have a primary-care physician” for follow-up, he says.

Even after they get clean, Rowe says, patients must re-enter the community, either directly or through a halfway house, and find a job despite the gaps in their work history, or a lack of one. (Many are young adults or veterans.) And their friends and relatives may still be using.

In addition to counseling and classes at the inpatient center, Rowe recommends patients find a peer group that is not focused on recovery from addiction, such as volunteering or sports. 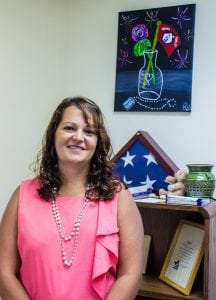 Angel Duncan, clinical director of the inpatient facility at Arms Acres (Photo by A. Peltonen)

It’s also important to resolve relationship or legal problems. “The focus is on having them try to change their lives so that there are no obstacles on the way to recovery,” he says.

Tammy Bender, a counselor at the center, says patients who have recovered are a great source of hope when they visit. “It’s very rewarding to see that, to see they live productive lives.”

Witte says one goal of the outpatient clinic is to help patients address emotional trauma that might contribute to their addiction, such as from abuse or neglect. Rowe can prescribe psychiatric medication to alleviate the immediate effect of post-traumatic stress disorder (PTSD), depression and anxiety.

Rowe sees addicts as young as 14 but says most patients are adults and those under 18 cannot receive methadone from the outpatient clinic. “We have an adolescent program, but we have not been getting very many referrals to it,” he says.

As I pull up the long drive of Arms Acres’ inpatient clinic in rural Carmel, an ambulance comes screaming out, scattering patients and alarming the horses in a small corral.

“Sometimes patients have seizures,” explains Patrice Wallace-Moore, the clinic’s CEO, whom I met in her office near the front door.

Wallace-Moore came to the 54-acre center, which was founded in 1982 by painter and philanthropist Winifred Arms, after working with addicted adolescents at Holliswood Hospital in Queens. She is passionate about everything Arms Acres, foremost her social workers’ skill at helping patients reconnect to the world before their insurance runs out. 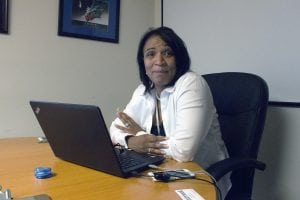 Patrice Wallace-Moore, the CEO of Arms Acres (Photo by A. Peltonen)

Most insurance companies will pay for three days’ inpatient care initially, or up to 14 total, she says. Before managed care, “we used to have longer stays, about 28 days. So we had fewer admits but longer stays.” The insurers’ argument, she says, was that withdrawal was not medically necessary because addiction is not always lethal.

Wallace-Moore credits Drug Crisis in Our Backyard, a grassroots organization founded in Mahopac in 2012, with helping to change the local landscape. (The group was created by Susan and Steve Salamone and Lou and Carol Christiansen, who lost sons to overdoses.) A federal law passed in 2008 and the Affordable Care Act passed in 2010 mandate coverage for addiction treatment.

Many of the inpatient clients are military veterans, as is Angel Duncan, the clinical director. A good number become addicted after receiving painkillers for battlefield injuries, and many suffer from PTSD.

When Wallace-Moore arrived at Arms Acres in 1998, the facility had 129 beds. Since the opioid crisis has intensified, the center has expanded to 183 beds, including 131 for rehab, 21 for adolescents and 31 for detox. Typically, 95 percent are full.

The goal of the staff, Wallace-Moore says, is to get addicts “to the next level of care, for example, outpatient clinics.”

In the late 1990s, about a quarter of patients would leave the clinic against the advice of doctors. Today that figure is below 15 percent. In addition, 60 percent of patients keep their first medical appointment made outside the clinic, up from as low as 15 percent, Wallace-Moore said. “We’d like 75 percent.”