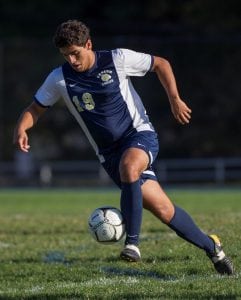 Lambe, a junior on the Beacon High School boys’ soccer team, scored five goals in a 6-1 victory on Oct. 3 over rival Hendrick Hudson, lifting Beacon to its 11th win of the season. Lambe, who led the team in scoring the past two seasons, has 13 goals in 2017, including eight in the last three games. He also has 13 assists.