“It’s exciting to watch kids discover how gripping a movie about real people living ‘ordinary lives’ — as opposed to wizards or superheroes — can be,” observes Julie Shiroishi, a Beacon parent whose son has attended documentary screenings hosted by the Reel Life Film Club, which begins its second season on Oct. 20.

The club, geared towards students in the sixth through ninth grades but also open to older high school students, is guided by documentary filmmakers and aficionados who live in the Highlands. It is hosted by the three area libraries, Butterfield in Cold Spring, Desmond-Fish (DFL) in Garrison and Howland in Beacon. 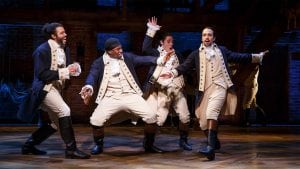 A scene from Hamilton’s America, a documentary that will be shown at the Desmond-Fish Library on Oct. 20 as part of the Reel Life Film Club. (PBS)

The 2017-18 season opens at the Desmond-Fish with a screening of Hamilton’s America, a look by PBS behind the scenes of the hit musical. The free monthly screenings, which each begin at 6 p.m., will rotate among the libraries on a Friday night each month through July, except in November and June. They are typically followed by discussion with someone involved in the production (live or by Skype).

Last year’s screenings usually attracted an audience of about 15 students. This year organizers and librarians are contacting teachers, promoting more on social media and extending the reach to Peekskill.

One organizer, Jackie Wlodarzack, a teacher at the Manitou School and a parent, said the club is designed to “encourage ’tweens to learn about people, events and places that are not part of their everyday experience and cultivate the personal responsibility that comes with sharing our planet with others.”


At the club’s September meeting, a list of potential films was discussed and debated. Even if a film is chosen, however, there is still the practical matter of getting permission to show it. For that, committee members often rely on documentary filmmakers such as David Gelber of Garrison (Years of Living Dangerously) and David Sampliner of Beacon (My Own Man).

“Story-telling in documentaries can be every bit as riveting as in great feature films,” says Gelber. “Think of Hoop Dreams, the saga of two black kids from Chicago who dream of playing in the NBA. The film is full of great characters, startling reversals and profound truths about individuals, families and society. It is hard for any feature filmmaker to do better than that.

“For kids, I’d say the advantage of docs over feature films is that it’s a lot easier to imagine making a documentary than a feature film,” he adds. “I’ll wager that a few of the kids who see our documentaries will end up doing just that. That’s one reason I’m involved.”

Cold Spring’s Sam Bates, who attended a few of last year’s screenings, puts it slightly differently, noting, “I thought it was a great idea having kids learn and be able to discuss the movie with the director. Of course, as well as eating pizza.” 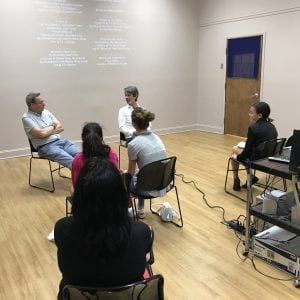 Among other topics, this season’s tentative schedule includes a look at slam poetry in a New York City high school; Philippe Petit’s 1974 high-wire walk between the Twin Towers; the pressures of high-level ballet competitions for teenage dancers; a 14-year-old girl’s attempt to sail solo around the world; and an election for third-grade class monitor at a school in Wuhan, China.

“Documentaries find drama in quotidian lives and poetry and philosophy on the tongues of everyday, seemingly unremarkable people, and that’s how I understand the world, that the dramatic and beautiful and important is all right in front of us if we just care to look,” says Sampliner. “That’s why I think it’s important to dangle them in front of kids as early as possible.  I want them to see that movies don’t have to be only about escaping reality.”

Marianne Sullivan, who helped organize the club, has not ties to filmmaking. She just loves documentaries.

“Some of the most memorable and important films I’ve seen are documentaries,” she says. “We thought that documentaries might help tweens to extend their understanding of themselves, other people, other cultures, how people triumph over adversity, and some of the challenges and opportunities that humanity is facing.”