In a ceremony on Oct. 14, Haldane High School inducted the first class into its Athletic Hall of Fame. In the first two years, the committee may select as many 10 people who graduated or coached at least five years earlier; it then drops to five annually. One team also can be inducted.

Biographical information and images are courtesy of the selection committee.

Scoba was a member of the first football team fielded by Haldane in 1932. The high school, located on High Street, played at Kemble’s Field on Kemble Avenue.

Mike participated in football, basketball and baseball, but he excelled in football and was considered one of the best running backs in that era. Upon graduating from Haldane in 1937, he received a scholarship from Peekskill Military Academy, where he also played football. 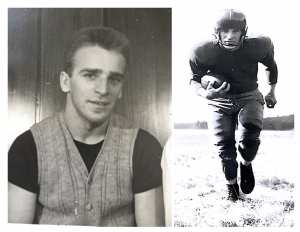 In 1940, having received 15 scholarship offers, he accepted a scholarship to Syracuse University with the desire to become a commercial artist. With war sweeping Europe, he volunteered for the Army in March 1941, nine months before Pearl Harbor. Serving as a First Sergeant, his company of 52 ambulances landed two days after D-Day on Utah Beach, crossing through the hedgerows of Northern France, the Ardennes, Central Europe and the Rhineland. Mike was awarded the Bronze Star for his actions during this period and was discharged in March 1945.

Entering Syracuse in 1946, Mike played football and was named an All-American in 1947. After lettering at Syracuse in 1947 and 1949, he was elected to the College Football Hall of Fame. Mike graduated in 1949 with a degree in physical education and after foregoing a draft selection to the Los Angeles Rams, he began to teach and coach football and basketball at Beacon High School. Later he became an assistant principal at Beacon and, in 1968, became the principal at Forrestal Elementary School in Beacon.

After 32 years of service, Mike retired retired in 1982 to enjoy his wife, children, 10 grandchildren, and friends. Ever the artist, he painted and made furniture and Christmas gifts for his grandchildren. He was a quiet man who lived a simple life. Mike died May 31, 2006, at age 88.

Schatzle attended Haldane for his junior and senior years, participating in track and basketball. On the track, he was the league champion for two years in the 100- and 220-yard dashes. Joe received a track scholarship to Manhattan College, where he established a school record of 20.91 seconds in the 220-yard dash. Throughout his college career, Joe was a member of the 440- and 880-yard relay teams that never lost a race. 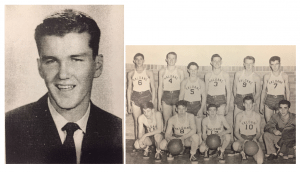 In 1953, Joe was selected to the United States Team to participate in the British Games, where he won the 100- and 220-yard dashes. He was inducted into the College Hall of Fame in 1991.

Joe went on to coach in the Wappingers Central School District for 17 years. During that period, he won 13 league titles. Joe died June 4, 2011, at age 79.

Milkovich has a long history at Haldane. As a student, he competed at football, basketball, track and baseball. He was captain of the football and baseball teams, and was the leading scorer of the 1951 boys’ basketball team that won the league championship. As a baseball pitcher he was 8-0 in his senior year, leading the team to win the league title. 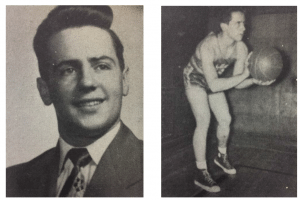 Frank spent his entire educational career dedicated to the students of Haldane. He was a science teacher from 1957 to 1973 and then the high school principal until 1986, when he became assistant superintendent. Throughout his time at Haldane he was a steadfast supporter of the athletic programs and always worked to ensure that student athletes found success in the classroom and on the playing fields. He retired in 1989 after 32 years of service to Haldane students.

Packy Shields coached all three seasons of track, indoor track, and cross country from 1962 to 1986, plus an additional season in 1987 — nearly 75 seasons in all. Under his guidance, Haldane won eight spring track league championships and, at one point, won 26 consecutive dual meets over a four-year period. 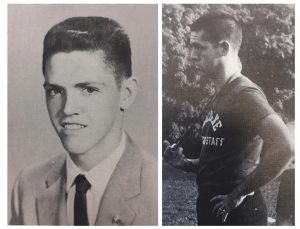 “Mr. Shields’ support and guidance was not only unwavering towards his athletes, but reassuring,” said O’Connor. “Without a doubt he was dedicated and committed to providing his athletes with the best tools for training and competition. Simply put, he prepared his athletes. At a time when he was contemplating retirement from coaching, he waited until after I graduated. We were able to finish what we started. Mr. Shields is classy, dedicated, committed, and supportive coach.”

As a student at Haldane, Packy was a four-year varsity athlete, competing in football, basketball, baseball and track. He was also a charter member of the Haldane National Honor Society (1955). Packy graduated from Albany State University in 1962 and returned to Haldane to teach social studies for 32 years.

Jack LaDue earned a varsity letter in football, basketball, track, and baseball during his time as a student at Haldane. In 1960, he was voted an All-League halfback as a member of the football team.

In basketball, Jack earned All-League and All-Area honors. In 1961, he led the league in scoring, averaging 18 points per game and also grabbed 31 rebounds during a single game. 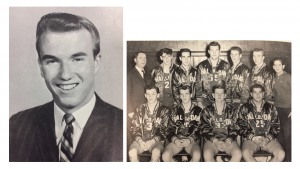 In track, Jack was a three-time double winner in the 100 and 220 in the league championships. He also won the Section 1, Class C championship in the 100. He played shortstop and pitched as a member of the baseball team.

Jack attended Penn State University and was a sprinter on track team. While there, he ran against and defeated future NFL Hall of Famer Paul Warfield of Ohio State in the 60-yard dash. Later, he was a physical education teacher and driver education instructor for the Haldane school district.

O’Connor was one of the finest all-around athletes who participated at Haldane. She was All-League in softball, the leading scorer in basketball, played volleyball, and still holds the school records in the shot put, the javelin, and the discus. 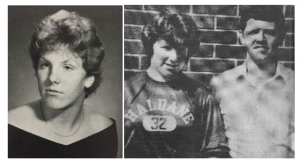 In 1986, Brenna won the state discus championship for the second time and a week later won the Eastern States discuss championship with her personal best throw of 146-11. That throw was one of the best in the country; she was offered an athletic scholarship to Penn State where she competed for four years in the Penn State track program.

As a senior, Brenna was named the Poughkeepsie Journal Player of the Year for both volleyball and track and field, she received the Westchester/Rockland Top 10 Award, and was the first female to receive the David Dahlia Award. She was also an Honorable Mention All-American by the National High School Athletic Coaches Association. She amassed seven gold, three silver and a bronze medal at the Empire State Games, along with five golds and two silvers from the Arlington Relays during her high school career.

The girls were the first sports team in the history of Haldane High School to become state champs. They defeated Rye Neck and Pawling to claim the Section 1, Class D title. In the regionals, the girls defeated the defending Class D champions, Eldred, 51-43, then headed to Queensbury for the state finals, followed by many faithful fans. By defeating Avoca 57-39 and Charlotte Valley, 43-41, the Haldane Lady Blue Devils were named Class D state champs.

The season was not quite over. The last game was played at Marist College against St. John’s Prep for the Federation title.

The Lady Blue Devils of 1989 finished the season with a record of 25-1 and an average margin victory of 23 points. They were ranked No. 3 in the New York State Sportswriters Class C-D poll.

Josh also earned All-League honors in baseball in 1987, 1988, 1989 and 1990. As a senior, he was captain of the 1990 state runner-up baseball team and was named First Team All Section. He also received the Bernie Dillon Award at graduation. Josh continued his baseball career for two years at Seminole State College in Oklahoma, where the team was ranked No. 1 among junior colleges in 1991. During both seasons at Seminole, he participated in the College World Series. Josh transferred to Campbell University, where he was named to the All Big South Conference team and was presented with the James RysKamp Award, given to the player who best exemplifies character, dedication and baseball prowess.

Jen Moran was a whirlwind of hustle and hassle to opponents while on the basketball court. Her immense passion for the game, combined with great talent, manifested itself in 1,776 career points, making her the second all-time lead scorer for boys and girls in Haldane history.

Jen’s relentless work ethic shined through five years of varsity basketball, as she helped lead her teams to three state Final Four appearances and an overall record of 97-15. Jen was an All-League player from eighth grade on, and All-Section her last three years. She was also recognized as first team All-State her senior year. 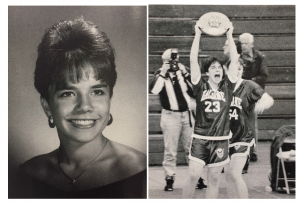 Jen was on the Journal News All-Star team from freshman year on and was also named the 1993-94 Gannet Suburban Newspaper Girls Basketball Player of the Year as a senior.

In addition, Jen was a member of the Hudson Valley Scholastic Women’s team that won a gold medal at the Empire State Games.

Jen’s hard work and leadership skills on the court landed her a basketball scholarship to St. Thomas Aquinas College. She continued her basketball success in college, amassing nearly 1,000 points. 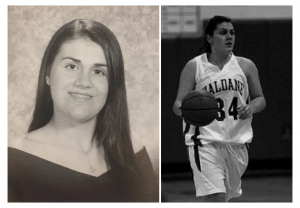 In her senior year, Brittany was New York State Class C Player of the Year and led her team to a state championship, where she was named Most Valuable Player. She also received the Con Ed Award, MVP of Class C, and three-time Section 1 MVP.

Brittany earned a scholarship to Pace University, where she continued to receive accolades. She is the seventh player in Setters’ history to record more than 1,000 career points and rebounds, and ranks third in the Pace annals with 1,757 points. Today, Brittany is in her third season as a graduate assistant coach with the Pace team. Thomas always put academics first and held mandatory study halls whenever there was a late practice. During the off season he coached summer league and AAU teams, ran several weeks of camp and somehow found time to spend with his family.

With a winning percentage of .872 (273-40), he was inducted in 2008 into the New York State Basketball Hall of Fame. His teams captured 10 Class D, Section 1 titles, four Class D state titles and three Class D Federation titles.