From the first whistle, the Philipstown Boys’ U9 Vikings overwhelmed the visiting Goshen Red Wolves on Oct. 15, dominating the first half with stealthy passes, quick runs up the field and good communication.

This determined and well-coordinated offensive pressure led to Vikings’ goals in the first half by Elias Moran and Rhys Williams. Strong defensive efforts from Oliver Choi, Joseph DeMarco and Kiyoshi Tomizawa kept the Red Wolves at bay for the remainder of the first half. But, the Red Wolves were not deterred by the 2-0 half time deficit and, at the start of the second half, responded by quickly scoring two goals before taking the lead with a third. 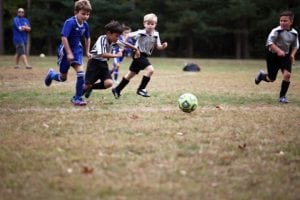 The Vikings answered this challenge and rallied to even the score at 3-3 with a clever goal by Jack Fitzgerald. With the game hanging in the balance, the Red Wolves were awarded a penalty kick and a chance to re-take the lead. But, the attempt was sent wide of the goal and the match eventually concluded with a 3-3 draw.

It was exciting match to watch and both teams can be proud of their performances. Unfortunately, the Red Wolves could not furnish the player cards required by the league and the match is officially recorded as a forfeit. As a result, the Vikings are now 2-2-1 and will next face the Wappingers Gladiators in an away match on Oct. 22.

The boys’ U9 Team Storm defeated the Shrub Oak Rebels in thrilling fashion on Oct. 15, and broke some important records.

The defense, led by Griffin Lucca, Lincoln Wayland, Gavin Mulhoney, Alex Gaugler, and Chris Kordaris made some incredible saves and kept moving the ball back up to the feet of the offense. Goalkeepers Theo Saks and Jack Ferreira kept the Storm alive and in the lead.

It was a memorable magical picture perfect day. The offense was on fire and tore up the field with their hustle and hard earned play. Team Storm became the players they knew they have always been and worked very hard to get to this victory. Team Storm lived up to their potential again and proved to themselves how well they can play soccer together.

A unified, patient and aggressive Team Storm took over from the very beginning of the match and never let go of their intensity and tenacity. Team Storm should be proud of how far they have come. Onward and upward!

Philipstown started the game with strong passing and was able to capitalize at the 8-minute mark when Colin August sent a nice throw-in to teammate, Tim Ben Adi. Ben Adi dribbled down to the end line and crossed to Ryan Eng-Wong who put the ball away to take an early 1-0 lead for Philipstown. Arsenal continued to dominate possession for most of the first half but Croton came on strong at the end and was able to put two goals on the scoreboard to make the score at the half, Croton 2, Philipstown 1.

Arsenal put an exclamation point on the beginning of the second half when Evan Maasik received the ball and passed it to Ben Adi who blasted a shot past the Croton keeper to tie the game, but the Tigers quickly recaptured the lead with a goal of their own.

For the next 15 minutes, both teams fought for the ball but Philipstown’s Eng-Wong sent a pass to Maasik who took a touch to control the ball and tucked it into the right corner to tie the game again. Five minutes later, Maasik sprinted past his Croton defender and dribbled to the end line where he crossed the ball to Danny Urbanak who put a nice finish on the ball to take the lead for the Gunners. Next, Colin August dribbled through the midfield and passed to Eng-Wong. Eng-Wong took a shot that the Tigers’ keeper saved but Eng-Wong got his own rebound and put the ball into the back of the Croton net.

Finally, near the end of the game, Arsenal’s Daniel Carlos converted a penalty kick to bring the score at the whistle, Philipstown 6, Croton 3. Kudos to the entire Philipstown Arsenal team for playing with heart and never giving up.

Hawks Battle Brewster to a Tie

A perfect day for soccer brought the Girls U10 Hawks to Brewster to battle the Amazons. Despite being down two players, the Hawks were ready to compete. The Amazons were the Hawks’ toughest competition yet and the score remained 0-0 for most of the game, until late in the second half when the Amazons scored their one and only goal. Only minutes after the Amazon’s goal, the Hawks answered back with a beautiful long shot from Olivia Moran to tie up the game.

Taya Robinson, playing left fullback, stole the ball from the Amazon’s offense, then gave a through pass to Moran who shot and scored. Robinson consistently and continuously set the ball into motion for the Hawks offense and this time it paid off. Anna-Cat Nelson, Marisa Peters, and Gillie Solovieve put constant offensive pressure on the Amazon’s goalies while Jessica Tudor, Genevieve Knox, Fiona Mooney and goalkeeper Ava Vasta played excellent on defense.

Although the Amazons were a physical team, the Hawks held their own, remaining strong and aggressive, ending the game in a 1-1 tie.

The Girls U11 Phoenix travelled into Goshen, the Orange Country seat and the home of the Harness Racing Hall of Fame, to battle a well-stocked Goshen Spirit.

With 16 girls, the Spirit had a leg up in numbers, but the Phoenix, with no subs and one suspect stomach, put up a more-than-legitimate fight. The first half saw a lot of pressure on the Phoenix goal, but Sophie Tomlins has blossomed as keeper, with clearing punts that catalyze a change in pace and direction. Her back line of Laurel Sassano, Josie Foley-Hedlund (who at about 75 percent was considering a strategy of becoming sick on any opponent who scored) and Kira Drury, did their usual stalwart job, well assisted by Amelia Alayon. Amelia and Kira, especially, had a number of well-placed break-out passes to midfielders Sofia Rasic, Ada Caccamise, and Lyla Chandler.

Only a Goshen bomb from outside the 18-yard box and a nice cross and tap-in put the Spirit on the board. In the second half, the Phoenix benefitted from a fresh set of legs as Amelia took over goal-tending responsibilities from Sophie, who proceeded to move and distribute the ball through the midfield and up to striker Zohra Kapoor, who had a number of proto-breakaways that were snubbed out by an aggressive Goshen defense.

As quantity began to get the upper hand over quality (or at least heart) Goshen was able to covert twice more for a final score of 4-0, which, while a loss, showed again the improvement that the Phoenix are making!