Think you know every twist and turn of the tale of Cinderella? The Beacon Players have a few surprises up their sleeves — and tucked into their gowns and slippers.

The Beacon High School theater group will perform the 2013 Broadway update of the 1957 Rodgers and Hammerstein musical, Cinderella, which includes a whole lot more contemporary psychology — think oppressed kingdoms, peasant revolutions, rabble-rousers and a more forthright protagonist who orchestrates her own fate.

The show opens on Friday, Nov. 17 at the high school, with performances on Saturday and Sunday afternoons, as well. 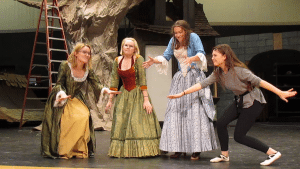 After presenting The Who’s Tommy, a rock musical, in the spring, the students wanted something more familiar that wasn’t Oklahoma or Carousel, said Anthony Scarrone, who directs the twice-yearly productions.

Many students liked the idea of a child-friendly show but were divided about Cinderella. So Scarrone split the players into two groups — one to argue for the musical, and one to argue against.

“It was up to one group to convince the other,” he said. The scales were tipped because, he said, many students had seen the Broadway revival and loved it.

The show also was appealing because of the creative props, scenery and costumes it would require, many of which the players fabricated themselves. Cinderella includes a fox who turns into a footman; raccoons which turn into people; a town with stone walls, shingles and pinnacles; a giant tree; and horses made of fabric and twisted wire.

Many transformations occur on stage, and there are quite a few special effects. Junior Jillian Warner leads the costume design team.

The student creations are augmented by professional costumes, many from Bottari and Cace Theatrical Designs, which did the Broadway production. There’s also a spectacular coach designed by Nino Novellino for the Westchester Ballet Center to deliver Cinderella to the ball.

One crucial element retained from the original production is the score, with familiar songs such as My Own Little Corner, Impossible/It’s Possible and Ten Minutes Ago. Elizabeth Cenicola (who is playing Cinderella) and Elyse Istavan (who appears as a featured dancer) handled the choreography. As with earlier productions, middle school students from Rombout make up the ensemble of townspeople and pages.

Tickets for the three performances (7 p.m. on Friday and 2 p.m. on Saturday and Sunday) are $12 for adults and $5 for students and seniors. See beaconplayers.com or at visit the box office at the high school, which is open Saturday from 9 to 11:30 a.m. and Wednesday from 6:30 to 8:30 p.m. Pre-show luncheons scheduled for Saturday and Sunday are sold out.