The Philipstown Storm took to the field on a sunny but cool Sunday afternoon and came away with a well-deserved win with contributions from the whole team.

The front line of Connor Keegan, Marco DiLello, and Gavin Mahoney had a number of speedy breakaways, which resulted in a slew of goals. Connor added two more to his season tally, and Gavin and Marco both notched their first tallies of the season. The defense of Griffin Lucca and Lincoln Wayland provided a great backstop, and Theo Sacks displayed stellar and aggressive goalkeeping.  Alex Gaugler provided additional support on defense, and Jack Ferreira served as both winger and second-half goalkeeper.

The true star of the game, however, was Lenny Wolfe, who, serving in a wide-ranging central midfield role, was able to bring the ball forward as well as track back and help out on defense. In addition, he capped off his day with a goal of his own, contributing to the final tally of Philipstown 5, Nirvana 3. The Storm close out their season on Nov. 19 at home against the Shrub Oak Rebels.

The Boys’ U9 Vikings played a determined, gritty match, but ultimately succumbed to the superior LaGrange Red Devils in a 2-0 defeat. With only a small handful of opportunities to score, the Vikings offense was stymied by the Red Devils, who consistently prevented the Vikings from converting set plays, corner kicks and direct kicks into scoring opportunities. Despite a cohesive Vikings defense – as always, led by commendable efforts from Joseph DeMarco, Joey Smith, Oliver Choi and goalie, Patrick Shields – the Red Devils managed to score a goal in each half to finish the game victorious.

According to comments from the opposing coach, the match was only the second time they were challenged this season. While this sentiment won’t likely provide much comfort to the hard-working boys of the Vikings, now 2-3-3, the Nov. 12 effort was a notable improvement over their 5-0 loss to Red Devils earlier this season.

The Vikings next face the visiting East Fishkill Extreme in a make-up match on Nov. 18, followed by their final match of the season, also at home, against the Beacon Braves on Nov. 19.

The Philipstown U10 Force ended their season on a high note on Sunday, bouncing back from a difficult defeat the day before to finish the year with a record of 3-3-1.

The Nov. 10 game in extremely cold conditions saw the Force concede a number of goals to the well-organized East Fishkill squad, before some late heroics by Philipstown brought the score to a respectable 9-6. Two of the physically larger Fishkill players towered over the Force boys to such an extent that one parent was heard to jokingly remark that the organic, no-hormone diets favored by many Philipstown families might have to be reconsidered. 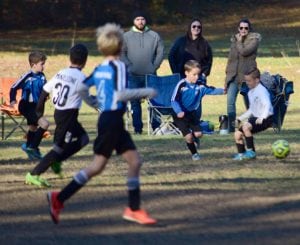 On Nov. 11, a determined and disciplined Force squad dominated the visiting Titans from Shrub Oak, 6-2. Striker Roth Westphal opened the scoring with two quick goals, each of which luckily bounced off Fishkill defenders. The play was fast paced and tense, with Defenders Owen Sullivan-Hoch, Owen Powers, and Gabriel Rotenberg shutting down all threats ahead of smart play by goalkeeper George Stubbs, and halftime found the Force holding the 2-0 advantage.

In the second half, the Titans came out firing, scoring soon to cut the lead to 2-1. However, for every challenge the visitors mustered, Philipstown had an answer. Magnus DuBois had a brilliant play up the line to pressure the defense, and Lincoln McCarthy soon scored with a smart shot on a breakaway, and shortly thereafter Bryce Kinney did the same. A slick Shrub Oak pass and shot brought the visitors back within two goals; however, Philipstown bounced back, buoyed by the strong set pieces and throws from Zackery Fox.

Offensive players Lucky Bell, Anthony Bailey, and Diego DiGiglio kept hammering at the defense, allowing McCarthy to score twice more for a final score of 6-2. After saluting their coaches, Danielle McCarthy and Dirk Westphal, the Force headed into their off-season in high spirits and look to come back strong again next year.

The Boys U-14 Philipstown Arsenal travel soccer team put an exclamation point on an excellent season this past weekend, winning decisively against the Town of Cortlandt and New Paltz in back-to-back weekend games.

First Philipstown traveled on Nov. 10 to Walter Panas High School where they met the Town of Cortlandt Stars and Strikers in a game played under the lights. The Gunners started the game strong, maintaining possession with two-touch passing across the field. Eight minutes in, Colin August received the ball and sent a beauty of a through-pass to teammate Evan Maasik on the right wing. Maasik cut past his defender and sent a shot into the back of the Cortlandt goal to take the early 1-0 lead. Next Philipstown middle, Chase Mayer sent a laser pass to Maasik who used his speed to fly past the Stars and Strikers’ defenders and tuck another goal past the Cortlandt keeper to bring the lead to 2-0.

Five minutes later, Maasik sent a through ball to striker, Ryan Eng-Wong who launched a clever chip over the goalie’s outstretched hands to extend the Arsenal lead to 3-0. The offensive onslaught continued in the second half with Maasik winning the ball and dishing to middle, Colin August. August sprinted past his defender and blasted the ball for his first and Philipstown’s fourth goal of the game.

Relentless on the attack, Maasik connected with Eng-Wong again and Eng-Wong put a nice finish on his shot for his second goal on the day. Finally, sweeper, David Tacuri stopped a Stars and Striker push at the midfield and launched a pass to August who placed an excellent ball into the Cortlandt net for his second goal of the outing. Philipstown goalkeeper, Jake Piotrowski and the Philipstown defense of Ezra Beato, Daniel Carlos, Patrick DiNardo, Rowen Kuzminski, Stephen Robinson, Aidan Sullivan-Hoch, David Tacuri, and Danny Urbanak shut down all of the Town of Cortlandt attempts on goal and the score at the end of the game was Philipstown 6, Town of Cortlandt 0.

On Nov. 11, Philipstown Arsenal traveled north to New Paltz to take on the Cyclones. The early minutes proved shaky for the Gunners as they struggled to find their footing against the solid New Paltz team but the team quickly re-grouped and got down to the business of scoring goals. First, Ryan Eng-Wong sent a cross to middle, Colin August who took a controlling touch and banged a shot past the Cyclone keeper to take the lead for Arsenal.

Only three minutes later, Evan Maasik won the ball, dribbled through the defense and blasted a shot that the New Paltz goalie saved but couldn’t handle and August was there to put the ball away in the upper right corner of the net. Philipstown continued pounding the New Paltz defense and on one heads-up play middle, Tim Ben Adi saw the keeper was far out of the goal and launched a huge chip over his head to extend the lead to 3-0 for Arsenal. A New Paltz foul at the 20-minute mark resulted in a perfectly placed direct kick by middle, Jasper Drake, for Philipstown’s fourth goal of the game.

Late in the half, New Paltz’s star midfielder, Cristo Trujillo, put the Cyclones on the board with his own expertly placed free kick and the Gunners closed out the scoring at the end of the half when Colin August put a smart finish on a deflected shot from Eng-Wong for the hat trick, bringing the score at the half, Philipstown 5, New Paltz 1. The second half became more physical and Philipstown was able to capitalize on New Paltz fouls in the penalty area.

First, Evan Maasik was brought down and he was able to put his penalty kick away despite the New Paltz keeper getting a hand on it with an excellent diving save. Next, Chase Mayer received a strong tackle and he capitalized on the penalty when he blasted his penalty kick into the lower right corner of the goal.

Finally, Arsenal closed out the scoring when Ezra Beato flew into the goal box with a strong finish on a rebounded ball. Beato and Daniel Carlos took turns marking the dangerous Trujillo, and middies, Ben Adi, Drake, Mayer, Stefano Hammond, Jake Piotrowski, Stephen Robinson, Roy Smith and Danny Urbanak controlled the middle of the field, keeping the ball on New Paltz’s half. The Philipstown defense played a strong, team game, working together to hold New Paltz to the single goal and the score at the final whistle was Philipstown 8, New Paltz 1.

Congratulations to Philipstown who finished 7-1-1 for their season.

The Philipstown Girls U11 Phoenix played two tough games over the weekend.

The first, a make-up against Cortlandt on Nov. 10, was marked by extremely cold weather that seemed to dull the team’s energy, and with only one substitute, it was a challenging game. A well-disciplined Cortlandt team kept the pressure on throughout the game, and was able to keep the ball in the Philipstown half for much of the game. While the game ended with Cortlandt winning 7-0, by 30 minutes into the subsequent team party, the cold and the game results were long-forgotten.

On Nov. 11, the Phoenix held their last home game against the Shrub Oak Legends, and both the weather and the team’s effort were much improved. Sophie Tomlins and Amelia Alayon again traded off in providing great goalkeeping, and the defense of Ada Caccamise, Kira Drury, Dylan Ambrose, and Laurel Sassano deflected the opposing team’s runs. Going into halftime back on their heels, however, the team came out much stronger in the second half.

Josie Foley-Hedlund, Sofia Rasic, Lyla Chandler, and Zohra Kapoor were able to create some space and runs into the midfield and connect forward. The second half also saw a number of great runs by Morgan Murphy who through her speed and drive came close to the goal a number of times. While the game ended at 6-0 Shrub Oak, the second half saw much improvement, and the girls are looking forward to their last game of the season on Nov. 19 in Red Hook.