Sally Mayes prefers the stage version, which she will direct at the Philipstown Depot Theatre starting Dec. 1, for a three-weekend run.

“The movie takes the story ‘out,’ largely through adding men and exterior locations,” she explains. “The heart of the play is that it’s about these women and this beauty shop. The ‘me, too’ stuff is the sisterhood this play is about, the bonds that you cannot break. 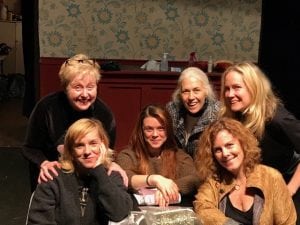 “It’s so much fun and a sweet story,” the director says. “Bring Kleenex and be prepared to laugh, because it has heart and a great underneath.”

Mayes, who also will be among the six actors portraying the owners, staff and patrons of Truvy’s, has been in Steel Magnolias several times, in different roles, including as a stand-by for two of them during the 2005 Broadway production. The other five performers are Jennifer Lee Andrews, Maia Guest, Julie Heckert and Liz Keifer, all of Philipstown, and Ursula Anderman, who lives in New York City.

Because the four Philipstown actors are longtime friends, “it grants us speedy entry into the meat of the play,” says Guest. “We don’t have to manufacture the years of friendship shared.” Adds Keifer: “We inhabit the true meaning of an ensemble as we literally all live in the same small town, and actually do depend upon each other in times of need.”

Says Andrews: “As friends, we have so much unspoken communication, so much shorthand with each other. I can look at these women and know exactly what they are thinking. We can laugh hysterically or break down crying at the drop of a hat.”

At the same time, Mayes says it was crucial to not let the Depot production drift into sitcom territory.

“The author, Robert Harling, is really good at setting up punch lines,” she says. “But there is so much more to it. These women come to the beauty parlor to be together, to be in a safe place. To create it onstage, you need the cast to feel the same way.” 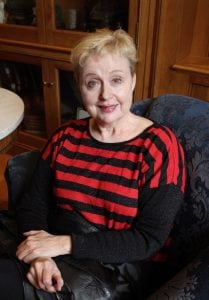 Sally Mayes (Photo by A. Rooney)

Mayes says that directing is “85 percent casting — then get out of the way.” Andrews says Mayes’ experience with the play and working with the playwright during the Broadway run has been a boon. “Sally has a wealth of information and intimacy with this piece most directors just aren’t blessed with,” she says. “She is really good at sharing the small details that make a scene truer to the intent of the writer.”

Mayes, who was nominated for a Tony for her performance in the 1994 Broadway revival of She Loves Me, was introduced to the Depot through its Cabaret in the Country series. (Its producer, Phil Geoffrey Bond, is her assistant director.) She suggested Magnolias after deciding she wanted to direct a production in a space much like the Depot stage, “something small, which I knew like the back of my hand, and with one set. When I first saw the Depot I thought: This is perfect — so intimate.”

Harling based the play, the first he had ever written, on his own close-knit family. It debuted off-Broadway in 1987, then toured the U.S. before landing on Broadway. Mayes, who grew up in Texas, says she has an affinity for the language and regional dialects so central to its charm. She also likes how the story unfolds.

“What I’ve realized, in the course of these rehearsals,” she says, “is that all the magnolias blossom during this show. They blossom and blossom.” And it’s funny. “I’m addicted to laughter,” she says. “Everything feels dark right now in the world and I know that if I didn’t have the outlet of laughter, I don’t know if I could handle the dark.”

One thought on “Women Who Blossom”