The Beacon City Council on Nov. 20 held a public hearing on a slew of changes being proposed to the city’s zoning codes, and while feedback was mixed on the details, lawmakers heard a familiar message from residents regarding development overall: slow down.

The council held several highly charged meetings over the summer before adopting a six-month building moratorium that ends in March. On Monday (Nov. 20), dozens of residents spoke during a 90-minute hearing on proposed guidelines for the Main Street and Fishkill Creek zoning districts, as well as related amendments to the city’s comprehensive plan and zoning map.

The hearing — all four proposals were grouped into one hearing — will continue at the council’s Dec. 4 meeting. 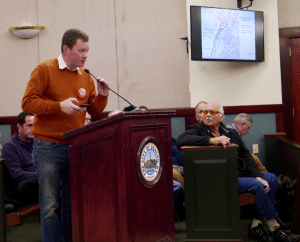 Dan Aymar-Blair, one of the organizers of the Beacon People’s Committee on Development, addresses the City Council. (Photo by J. Simms)

If adopted, the proposal to rezone portions of Main Street would extend the Central Main Street zone along the entire length of Main and into East Main Street, up to the Fountain Square area. Building height in the zone would be reduced to three stories, with a fourth allowed in some situations if set back from the street. Design standards would be tightened, as well.

The council had considered extending the Central Main zone north onto Fishkill Avenue but that appears to be off the table. However, speakers questioned whether extending the zone would cause the east and west ends of Main Street to lose their unique character, too.

“I would want to see very, very specific [regulations], so anybody who comes to develop knows exactly what to expect. This is what’s allowed — that’s it,” said Elaine Ciaccio.

Representatives from the Howland Cultural Center, which is located at 477 Main, cautioned that historic districts could suffer as well. “You do not improve history by radically altering a historic cityscape,” said Eleni Smolen, reading a letter from Craig Wolf, the president of the center’s board.

Buildings in Fishkill Creek’s development zone would be capped at three stories. Perhaps the most significant changes for the creekside zone are proposals that new developments must devote 25 percent of their space to non-residential uses, and that the city begin calculating parcels’ allowable density on buildable acreage.

The latter change would mean that steep slopes and other unbuildable, environmentally sensitive land would not be considered when calculating density on a property.

Several speakers suggested that new development along the creek should be predominantly, if not completely, commercial.

Toward the end of the hearing, real estate broker Daniel Aubry offered a contrarian viewpoint, saying that people concerned about overdevelopment could stop worrying.

“Developers have to invest a lot of money to do what they do. They hate uncertainty, and we have created an unsustainable level of uncertainty,” he said. “You need not worry about them disturbing Beacon any more. After the 1,000 units that have been approved [are built], it will be preserved in amber.”

But the tone for the evening was set by the first speaker, Samantha Brittain, who asked the 75-plus audience members to stand if they opposed four-story buildings on Main Street — referring to the towering building under construction at 344 Main, which has become a lightning rod for residents’ discontent with development.

“Your constituents are speaking to you,” she told the council as the majority of the audience rose. “They do not want any more 344 Main Streets.”