The trustees of the Mekeel’s Corners Chapel were pleased to see photographs of the chapel and its steeple in The Current (Steeple Chase, Dec. 1).

However, the chapel was identified as the “Union Church,” which has never been its official name. It was originally (in 1867) the Philipstown Methodist Episcopal Union Chapel, whose congregation was centered on Mekeel’s Corners, now the intersection of Routes 9 and 301. 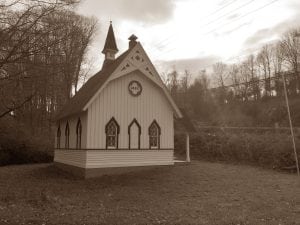 The congregation had disbanded by the early 1950s, when the building was rescued with funds donated by Helen Fahnestock Hubbard, whose property adjoined the chapel. The present association has maintained the chapel since 1961, following Mrs. Hubbard’s death.

The Mekeel’s Corners Chapel has no electricity or plumbing, although it does have an old wood stove. In recent years it has been the site of an annual Independence Day celebration (to which all are invited) and occasional other services.

Editor’s note: A newspaper clipping from 1867 referred to the building as the “Union Church,” which may have been colloquial. A later clipping, from 1950, noted the Methodist Episcopal Union Chapel had fallen into disarray and was being used “as a refuge for knights of the road” but would soon be restored.