Workshops designed to push projects along

Sometimes it’s simply about saying no — no to checking email, no to catching up with friends, no to going to an event you don’t care about.

It’s also about figuring out the times which work best for you to focus. Procrastination happens, and treating that as a solvable problem is the aim of Creative Completion, a free workshop held twice each month at the Butterfield Library in Cold Spring.

Led by Robin Hutchinson, whose background includes gallery and technology management and graphics, the workshops recently generated a collaboration, the result of which may be a patented medical diagnostic tool.

Hutchinson’s goal is to teach participants to think creatively to solve problems. She advises participants to be as specific as they can about whatever they are pursuing. “Give it details or it’s not as likely to happen,” she says. 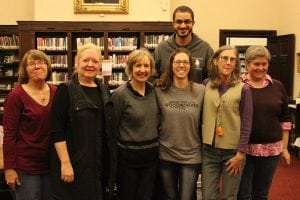 Each workshop begins with participants elaborating on what they’ve accomplished. For newcomers, Hutchinson writes five questions on an index card to reflect on, such as what steps they will take, completion dates and how they will reward themselves. The goal is to see projects through, or at least get a good start.

At a recent workshop, Pat Angerame reported she had been working on “eking out a new space at home where I could be more consistent with my writing.” She wound up working more than she had previously, everywhere except in the new space.

“Creating that empty space opened up some odd plug, and I was writing elsewhere, scribbling things on the backs of receipts on kitchen counters, anywhere,” she said with a laugh.

What drew Julie Corbett, an occupational therapist, was the wish “to get my ideas off my desk. I believe science is a creative process.” 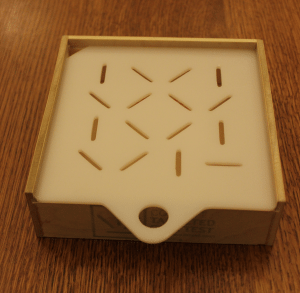 She noted there was not a standardized way to determine if a patient is a candidate for hand therapy. In one session, Corbett described what she had in mind, which was a wooden box with slots on the lid in a serpentine pattern for clients to slip coins into. She envisioned this as a way to have a standardized assessment based on factors such as time and accuracy.

“I needed a structure for how to get something to market,” she says. The first step was to interview consumers to see if there was a perceived need. The next step was to create a prototype.

Thinking about the box

Sabrina Ortquist had come to the workshop by accident, expecting to find a session presented by the Small Business Administration, which was taking place elsewhere. But she decided to stay and learn more.

Ortquist’s husband, Bryan, is a woodworker, and she handles the business end of things for their new business, Old Mountain Woodworking, in Middletown.

Hearing Corbett wrestling with where to get a prototype made, Ortquist said, “Let me talk to Bryan.” Her husband agreed and disappeared into his shop. “I had the wood, and I have very precise tools, and I’m a bit of a perfectionist,” he says. Eventually, he made 50 of the boxes in about 30 hours. 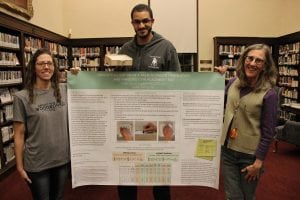 From left, Sabrina Ortquist, Bryan Ortquist and Julie Corbett, displaying the project description Corbett brought with her to the hand therapists’ conference. (Photo by A. Rooney)

Corbett brought the prototype to a conference sponsored by the American Society of Hand Therapists in California and hopes to apply for a grant to develop it. Eventually she envisions it being a diagnostic aid to assist people with buttoning, using keys, putting coins in a meter and in movements such as swiping a phone.

The creative workshops, she says, help her “reframe things. Creativity includes rumination. These sessions demystify things and allow us to understand that stumbling blocks are part of the process.”

The next Creative Completion workshop is at the Butterfield Library on Thursday, Dec. 21, followed by sessions on Jan. 4 and Jan. 18. For information, email Hutchinson at [email protected]