An eyesight test is so familiar that few people think much about it. A screen is pulled down with lines of black letters of various sizes. You cover one eye, then the other, reading what you can.

Yet many people don’t have access to this simple test, such as the indigenous people of Peru, many of whom descend from the Inca. Because they are among the country’s poorest citizens, regular preventative and diagnostic medical care is not something they can depend on.

Knowing this, many medical missions focus on establishing short-term clinics. One organization is Cross-Cultural Solutions, a New Rochelle-based nonprofit which has sent around 35,000 volunteers abroad since its founding in 1995. 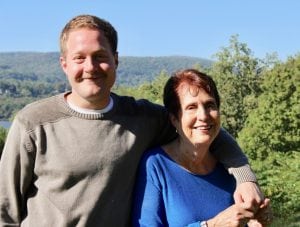 Jon Lilburne and Marion Dunn, back home in Garrison (Photo by A. Rooney)

Marion Dunn, 80, a therapist who lives in Garrison and is a member of the Cold Spring Lions Club, which focuses on vision projects, signed up with the organization to spend two weeks at a clinic at Villa El Salvador on the outskirts of Lima. Volunteers test the vision of children at a school there, then deliver free frames and lenses.

She mentioned her plan to a fellow Lion, David Lilburne, who thought his son, Jon Lilburne, might be interested in accompanying her.

Jon, 27, who grew up in Garrison, was indeed interested. He began fundraising to pay the expenses for the trip. Much of the money came from the Lions as a group and individual members, he says, as well as other friends and neighbors. “The community here was so generous — it was humbling.” 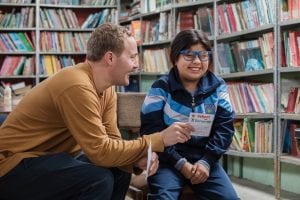 Particularly in light of the impoverished conditions they encountered in Villa El Salvador, Dunn and Lilburne were impressed by the school, Desportes y Vida, to which they were assigned.

“The parents pay a small fee or contribute their time,” Dunn said. “They have great classrooms; it was so impressive. The children were so eager to see us, giving us lots of hugs. This in a place where there was often no running water.”

After being trained to administer the tests, the Philipstown residents and three other volunteers worked in pairs to check each student’s eyesight. One volunteer handled the equipment, while the other guided each child (who ranged in age from 3 to 14) through the experience. 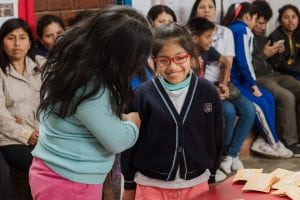 About a quarter of the children needed corrective lenses. A team of Peruvian ophthalmologists worked long hours over a few days, refining prescriptions. The 500 pairs of frames and lenses the volunteers brought were then distributed.

The volunteers also tested teachers and a few children who didn’t attend the school, said Lilburne. “The parental involvement is incredible, especially because they all have to work many hours,” Lilburne said. “They’re the people cleaning houses, selling fruits on the street, and this school allows them to have a real voice in how their children are being educated.”

Lilburne and Dunn said they were changed by their experience for a number of reasons. First, there was their inter-generational travel. “Getting to befriend and begin to love a non-relative youngster like Jon was wonderful,” she said. “I probably had more patience with him than I might have had with my children or grandchildren.” 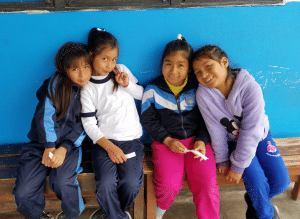 Lilburne was equally enthusiastic. “It was an incredible experience traveling with Marion,” he said. “She is a kind, enthusiastic and pretty damn funny woman!”

He added: “I don’t want this to sound like one of those ‘I went to a poor country and changed people’s lives’ clichés, but it truly does feel like I got more than I gave. You’re going into a school where 230 kids are giving you hugs. It was beautiful to feel the love, to see how much they appreciated the help.”

Dunn, who is no stranger to travel in South America — her late husband was Brazilian and they visited that country many times — calls her days in Peru “something I’ve always wanted to do, because I’ve been so blessed. These are the payback years.”