Eugene Guercio is co-owner, with Jodi Lindh, of Village Jerk, a jerky shop at 380 Main St. in Beacon. 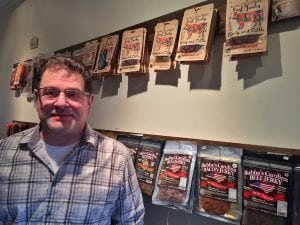 Eugene Guercio at Village Jerk (Photo by B. Cronin)

When Jody’s son was younger and playing a lot of sports, she found that jerky was a good snack. Later, when we traveled in the Carolinas and Arizona, we started coming across jerky stores. They didn’t have the mass-produced jerky you find at gas stations but healthier jerky made by small companies without all the additives.

Which are your favorites?

We love Highland Farms jerky, from Germantown; we always sell out of its garlic-flavored jerky. I’d also recommend Keto Carne from California; Jojo’s, which is big in Vegas; and Bubba’s Carolina, which has great flavors such as Native Cranberry and Orange Teriyaki. There’s also jerky from California and Oregon that is less dry because they make it with wine. 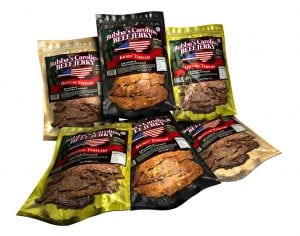 How much jerky do you eat?

I’m always snacking on it. I have Type 2 diabetes, so I try to stay away from carbs and get more protein.

Is all jerky made from beef?

No, we have venison, salmon, bison, even vegan made from coconut or cactus, which tastes a bit like eggplant.

Do you stock anything besides jerky?
This is Jodi’s spot, so we wanted to sell items that she likes, which is rustic country. So we have cowhide rugs and pillows, wooden walking sticks, cowboy hats, leather goods and branding irons for steaks. And we also like hot sauce.