Bulldogs, at 77-0, powering past challengers

Laughing and smiling in their navy polo shirts, the Beacon High School bowling teams started off the second half of the 2017-18 season on Jan. 3 taking on Roy C. Ketcham High School of Wappingers Falls at Schneider’s Fishkill Bowl.

The warmth in the building was not just a sharp contrast from the frigid temperature outside but a reflection of the sportsmanship on display.

Each player slapped high fives after every roll with teammates and opponents alike. Parents clapped for both teams.

High school bowling has been in a long decline. There was a time when Coach Brian Mahon had to make cuts because so many students came out for the team, but he says that seems like a long time ago. Now in his 20th season, he answered the call because the team needed a coach. He didn’t bowl competitively and his children didn’t bowl.

Ideally, Mahon says he would have 10 to 12 bowlers on both the boys’ and girls’ teams. This season he suits up seven boys and nine girls, including two sets of siblings. He has done his best, he says, to get students at Rombout Middle School interested in the game and has weighed going into the elementary schools. 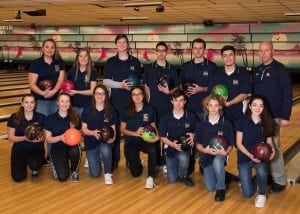 Something is working. The Bulldogs girls’ team through Jan. 11 has not lost in its first 11 matches. It is 77–0.

“We all know each other,” explains junior Brianna Virtuoso. “We’ve been playing together since seventh grade. We ask each other for help and support each other.”

In the first game against Ketcham, Brianna finished with four straight strikes to finish with 199 pins.

Her sister, Selena, has been the surprise of the season, says Mahon. She leads the team with a 195 average.

The anchor is junior Jenna Maffei. Mahon cites her dependability in clutch situations.

“We are doing better this season than I expected,” Maffei says. “We want to go to states. My approach is to keep focused and question what am I doing wrong or right throughout the match.” She finished the first game against Ketcham with 197 pins.

The key to victory, according to Mahon, is to pick up the spares. “Consistency is key,” he says. “It’s about the ability to adjust to the lanes and for players to find their mark.”

At 51–26, the boys’ team sits in third place in the league behind John Jay and Ketcham.

Matt Maffei is one of the leaders, averaging 195 pins. He says he finds the sport fun and enjoys the competition with his sister, Jenna. He began bowling in 2007. 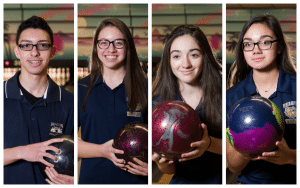 The Beacon teams have two sets of siblings: Matt and Jeanna Maffei and Selena and Brianna Virtuoso (Photos by Dawn Sela)

“Our parents wanted a sport that we could play together,” he says. A highlight last season was a 270 game in which he had 10 strikes. Against Ketcham, he sealed the win in the first game with a strike on his last ball, following a spare in the 10th frame for an impressive come-from-behind victory with 211 pins.

The boys lost to Ketcham, 5-2, but Mahon said the team was missing a few bowlers due to illness, including Vincent Bourderau, who like Maffei has a 195 average.

Kyle Giamportone is a senior in his third year on the team. Maffei recruited him to play. Asked about his technique, he replies: “When I approach, I focus on holding the ball tight and having a consistent release.”