The Haldane girls’ basketball team traveled to Beacon High School on Jan. 24 for a Highlands hoops showdown that saw the Blue Devils prevail, 37-27.

Both teams had their share of supporters in the stands, including 2017 grads and basketball stand-outs Hannah Monteleone of Haldane and Lauren Schetter of Beacon, now classmates at Pace University.

The match-up of senior interior players Brianna Dembo of Beacon and Allison Chiera of Haldane took center stage. Haldane’s defense forced Beacon out of its rhythm during the entire game, with Coach Tyrone Searight throwing a combination of full-court presses and diamond, man and half-court zone defenses at the Bulldogs. 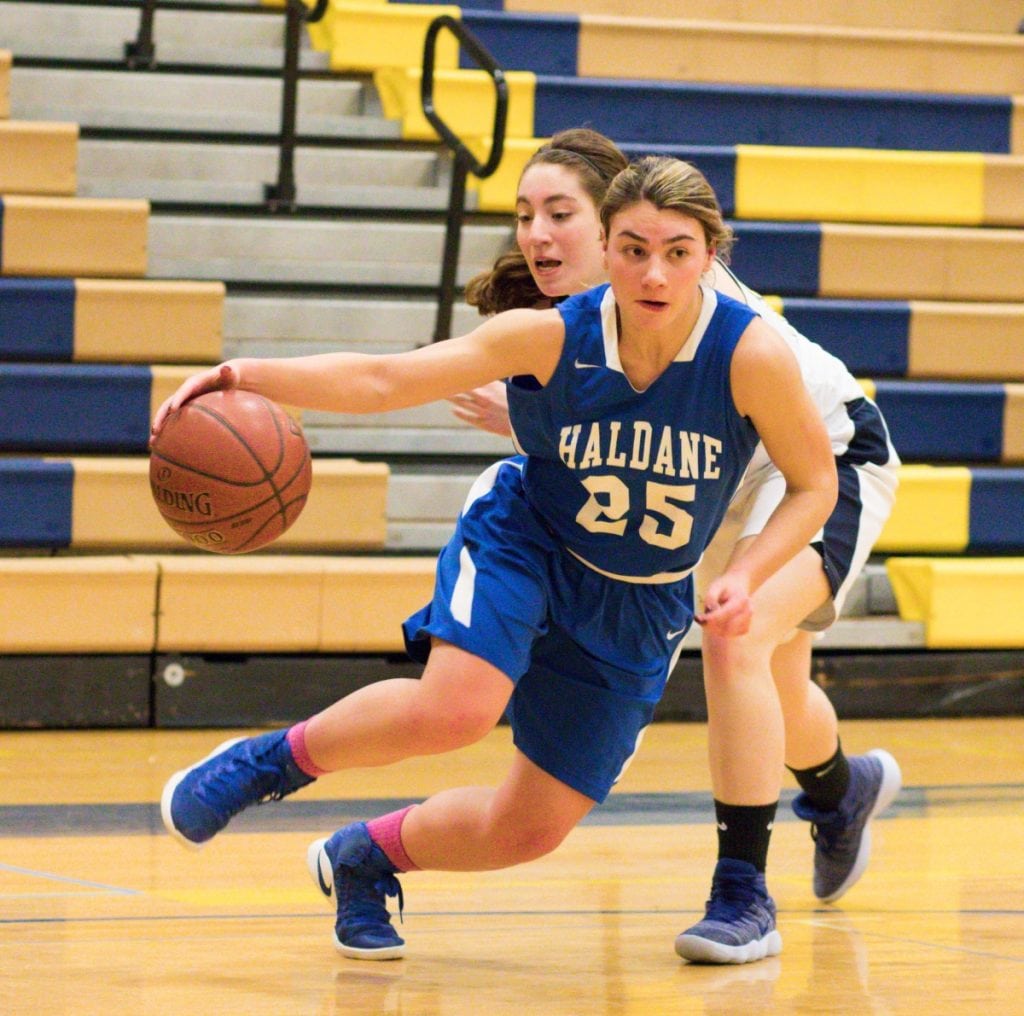 Abbey Stowell drives to the basket during Haldane’s Jan. 24 win over Beacon. (Photo by Dawn Sela)

The defense forced the Beacon players to play a pace they didn’t appear comfortable with. Beacon took three-point shots without success until late and Dembo struggled for touches in position to score. She scored six points but went 2-for-10 at the free throw line. Chiara had eight points but played sparingly in the second half and fouled out with 5:25 left to play.

Dembo would soar to catch post feeds like a wide receiver, but there were no easy buckets. At the same time, Haldane’s offense against Beacon’s zone gave Chiera a number of looks at the basket.

The Blue Devils are a quick perimeter-passing team and the three-point shooting of Olivia McDermott forces the defense to extend. If McDermott found a teammate in the corner and the Beacon defenders stretched to cover the corner, Chiera slid down to the box for the easy shot.

Beacon Coach Christina Dahl struggled with her guard play, shuffling players in and out, looking for consistency. Grace Affeldt led the Bulldogs with seven points. Enita Rodriguez, Skylar Kurtz and Sarah Evans, all who have shown flashes of potential, combined to score only three. 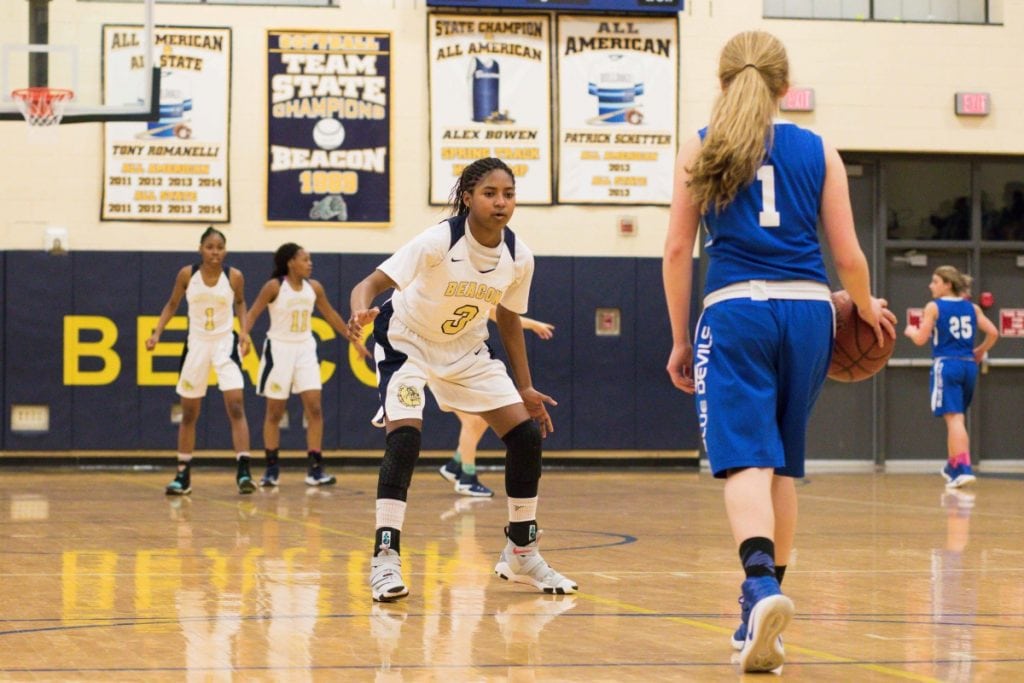 The rims were tight, or the shooters were. Both teams saw shots go three-quarters into the basket and spin out. Down nine points, Beacon failed to convert on three straight chances. The backbreaker was a three-pointer by freshly inserted Lexi Thompson that went in and out.

Haldane was led by sophomore Bela Monteleone with nine points. Sophomore McDermott scored seven, all in the first half, and sophomore Sophia Viggiano had five in the second half. Haldane’s final basket was a pass by Bela to her twin sister, Liv, cutting to the basket for a lay-up. “Our two seniors generally do something that jump-starts us out of the gate,” Searight said after the win. “And then when we need it, the sophomores pick us up.”

Haldane, which has won four straight, travels to Putnam Valley today (Jan. 26). “That will be a real dog test,” said Searight. “They play exactly like us, full-court pressure, pushing the pace. We are ready mentally, we need to be physically. If we wait until we touch the waters, it may be too late.”

Searight labored with some of the mistakes his team made during the game but has seen the Blue Devils move in the right direction. He said the team seemed to turn a corner during its 51-47 victory on Jan. 11 at Roy C. Ketcham High School in Wappingers Falls. “We aren’t there yet, but we are getting closer.”

The goal, he said, is a postseason run in the state tournament. Playing larger schools such as Beacon and Ketcham “make us stronger. We scheduled like we did last year preparing for a potential regional matchup with Pine Plains or Millbrook.”