The Putnam History Museum on Jan. 22 named the winners of its Jean Saunders History Contest for Haldane and Garrison seventh-graders. The contest, which has been conducted annually for more than 30 years, is named for the museum’s first curator. 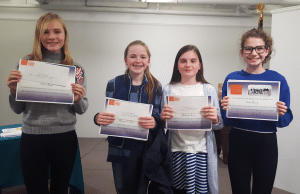 Winners in the Jean Saunders History Contest, from left: Chloe Rowe of Garrison, Mairead O’Hara and Madeleine Knox of Haldane and Celia Drury of Haldane. Not pictured are Caitlin Liu and Timothy Liu of Garrison and Sophie Sabin of Haldane. (Photo provided)

Chloe Rowe of the Garrison School won first place for her presentation, a board game that answered the question, “Why was Benedict Arnold so compelled to betray his own country?”

Madeleine Knox and Mairead O’Hara of Haldane Middle School won for their project, “How did the West Point Foundry affect the economic development of Cold Spring?”

Siblings Caitlin and Timothy Liu of the Garrison School received third place for “How did the Bear Mountain Bridge influence transportation in the Hudson Valley and the construction of future bridges?”

Finally, Celia Drury and Sophie Sabin of Haldane were awarded honorable mention for, “How did the local media react to the Women’s Suffrage Convention taking place in Newburgh?”

The awards presentation took place at the Desmond-Fish Library in Garrison.