On Jan. 19, Maura Kane-Seitz, Ashley Haines, Emma Rippon and Heather Winne finished in 10:35.16, trimming nearly eight seconds off the previous best mark while competing at New Haven, Connecticut, during the Yale Invitational. They were among eight athletes accompanied by Coach AJ McConville at the event. 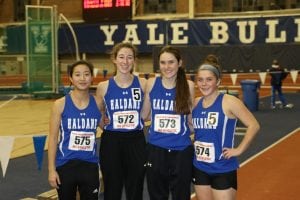 Winne, Haines, Kane-Seitz and Rippon at the Yale Invitational (Photo by Michael Haines)

On Jan. 21, the Haldane team of Kane-Seitz, Rippon, Haines and Shannon Ferri, competing at the league championships at the Armory in New York City, shaved off nearly two more seconds, winning in 10:33.83. At the same event, Jonas Petkus broke the school record while finishing third in the 300-meter run, at 38.61.