A home Rombout Avenue in Beacon was destroyed by a fire that began in the early morning hours on Friday (Feb. 9), and three of its four occupants suffered severe burns as they fled through the frames.

After the Dutchess County 911 Center relayed a distress call, the Beacon Fire Department arrived at the home at 98 Rombout at 4:46 a.m. with two-story home fully engaged. The occupants all exited from the second floor. Three went down the interior stairs through the fire and suffered severe burns. The fourth jumped from a second-floor window. 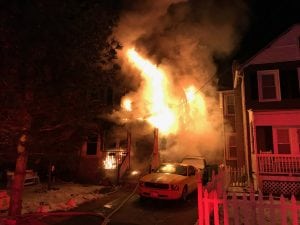 Beacon firefighters arrived on the scene at 4:46 a.m. (BFD)

All four occupants — Gloria Gamble, Arielle Gamble, Christian Matias and Raequan Keemer — were transported to St. Luke’s Hospital, and then three were transferred to Westchester Hospital.

The first hose line was taken by City of Beacon firefighters through the front door and to the second floor, with additional lines taken through the attic. They were hampered by a live power line off the house in the front yard (which was turned off by Central Hudson when crews arrived on the scene), a burst hose line and the icy ground. One firefighter was injured after slipping but remained on duty. 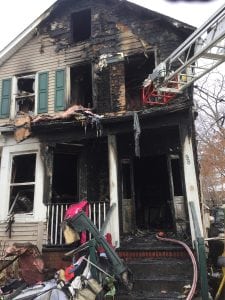 The home at 98 Rombout Avenue (BFD)

The cause of the fire remains under investigation.

The Village of Fishkill and Castle Point stood by at Beacon Fire Station 2 and the Rombout, Glenham and Hughsonville fire companies assisted at the scene. The Beacon Fire Department cleared the scene at 3:56 p.m.