Three days earlier, the team had made the 75-minute drive to Scarsdale to take on Edgemont High School, coming away with 56-41 victory. Haldane came into the game with an opportunity to double last year’s win total.

After the lengthy pre-game, Haldane Coach Joe Virgadamo made a point to get everybody’s energy up. The Blue Devils start four seniors with sophomore Matt Champlin. Because of an injury, senior Aiden Siegel was thrust into a major role as a relief ballhandler and an offensive option.

Both teams experimented with pressure extending their zone defense three-quarters court. Haldane wants to get the ball into the hands of Nick DiPalo, the Swiss army knife of the team as the primary ballhandler and scorer while also running the offense. 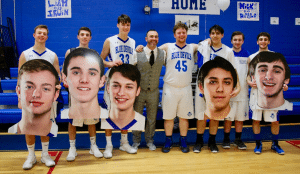 The boys’ basketball team recognized its seniors on Feb. 1. From left:  Lombardo, DiPalo, Irwin, Coach Virgadamo, Siegel, Anthony Sinchi, Ronan Tinsley and Daniel Rotando. Seven of the nine players will graduate in June; the other two are sophomores. (Photo by Sharon DiPalo)

“DiPalo is our captain,” explained Virgadamo. “He is the floor general, a scoring point guard that dictates the tempo.”

Edgemont started off the game hot, sparked by three three-pointers by senior Meshak Ngowi, then extended its lead to 22-17 in the first quarter. Champlin got into early foul trouble and after three quick points spend the majority of the half on the bench.

Liam Irwin provided a defensive presence, holding his own against the bigger Panther frontcourt.

Edgemont took a 32-30 lead into the half. DiPalo led Haldane with 15 points, scoring in every which way, from three-pointers to layups to creating his own opportunities off two steals.

“It took us awhile to acclimate with multiple guys stepping up,” said Virgadamo.  “We have junior varsity players who just moved up and Aiden and Liam had to play big.” 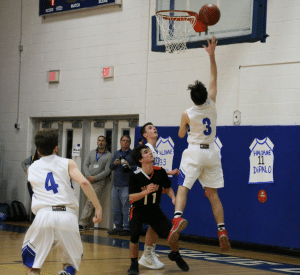 Alex Kubik (3) scores against Edgemont while Daniel Rotando (4) heads to the basket behind him. (Photo by Sharon DiPalo).

Champlin tied the game in the third quarter with a beautiful spin dribble to a 180 finish. Shortly thereafter, with 4:47 left in the third quarter, Edgemont’s star senior picked up his fourth foul. DiPalo would give Haldane the 37-35 lead with 4:30 remaining that the Blue Devils would never relinquish.

The third quarter ended 44-37. Edgemont focused its defense on DiPalo in the final quarter and Virgadamo directed Champlin to take over. The sophomore became more assertive in the fourth scoring eight points and finishing the game with 15.

DiPalo scored 10 points in the second half to close with 25, and while he and Champlin scored the lion’s share of the points, it was a team effort as the Blue Devils pulled away.

Anthony Lombardo held the Edgemont star to two second-half points, which was critical to the victory. Edgemont scored only nine points in the second half.

“Lombardo is the heart and soul of the team,” said Virgadamo. “He is our lock-down guy, a working mechanism of our machine. He gives everything he has, battling against the opponent’s best player every game.”

Haldane is poised to ride its strong guard play into the Section 1 playoffs. It hopes to return to Glens Falls, which the team reached the Class D championship in 2015 and 2016.

One thought on “Haldane Boys Finish 14-6”