Despite logo, no ‘Mickey Mouse’ organization

The smiling, fire-hose-wielding Mickey Mouse that adorns Dutchess Junction Fire Department vehicles has to be the most distinctive logo of any fire company in the state.

“We got permission from Disney to use it,” explains Chief John Miller. “We put Mickey on our first truck, purchased from Mahopac Falls Fire Department in 1973,” the year after the Dutchess Junction company was founded, and it became a tradition. 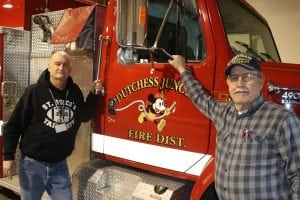 Miller notes that the volunteer company, which serves 550 residents and has a firehouse on Slocum Road in Beacon, is not only one of the smallest in the state, but one of the youngest, having been established only 45 years ago. By comparison, the Beacon Fire Department was founded in 1886, Cold Spring in 1896, Garrison in 1929, Continental Village in 1950 and North Highlands in 1969. 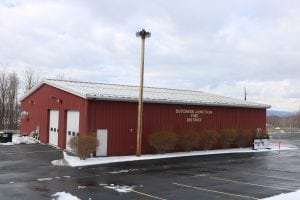 The department has 20 to 25 firefighters, with nine or 10 serving as its core, according to Assistant Chief Sean Barry, who has been a firefighter with the company for 43 of its 45 years.

Before 1972, fire protection for the area was provided by the Fishkill and Beacon departments, Barry said. The rates they were charging got too high, he said, so residents formed their own district, which is overseen by five commissioners.

Mutual Aid from the Public

The Dutchess Junction Fire Department offsets its expenses with two annual fundraisers. On Saturday, Feb. 17, it will host its seventh annual roast beef dinner from 4 to 8 p.m. at the firehouse, at 75 Slocum Road. Tickets for eat-in or takeout are $18 per adult, $16 per senior and $12 for children younger than 12. It has also held a pancake breakfast every Palm Sunday since 1973.

The company averages a little more than a call a week. “Last year we answered 64 calls, a record,” Miller said. Calls have gradually increased over the past few years, in part, he said, due to a housing development constructed just below the fire house about 10 years ago. The increased popularity of Breakneck Ridge has also added calls, especially to rescue lost or injured hikers. 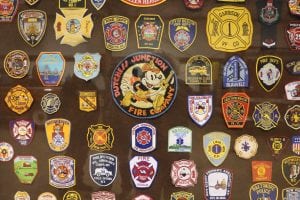 A collection of fire department crests at the Dutchess Junction Firehouse (Photo by M. Turton)

The department has a 23-year-old, 2,500-gallon tanker, a 1986 Jeep utility vehicle and an engine purchased in 2015, the first new vehicle it ever bought. It provides mutual aid to a number of nearby departments, including North Highlands, Garrison, Cold Spring, Glenham, Chelsea, Rombout, Fishkill and Castle Point.

Miller and Barry agree that, like with most of the roughly 1,500 all-volunteer fire companies in the state, recruitment is a constant concern at Dutchess Junction.

“Young guys are often interested,” Barry said. “But after their senior year at Beacon High School, they go away to college.” Residents who work two jobs or commute to the city are also less likely to volunteer. “The amount of time required for training is a challenge,” he said.