The Beacon City Council is expected to schedule a public hearing for Monday, March 5, on increasing the financial penalties for property owners who cut down trees without approval. The discussion was prompted by the removal of more than a dozen trees late last year by a property owner on Orchard Place.

The proposal would also allow Beacon Mayor Randy Casale to create a five-person Tree Committee that would meet when requested by the mayor or the city’s building inspector. The committee would include an arborist and one member of the city’s Conservation Advisory Committee. 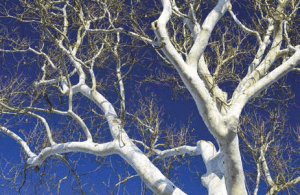 A majestic sycamore in Beacon (Photo by Michael Turton)

The council has debated for several weeks whether to establish stricter guidelines for when trees can be removed. The current law requires a permit for taking down three or more mature (6-inch diameter) trees within a year and a blanket $250 fine for violations. While the proposal before the council maintains that guideline, it increases the fine to $350 per tree.

At one point the proposed law would have required residents to apply for a permit when taking down any mature tree, taking down three or more 6-inch-diameter trees within 100 feet of each other within a year, or removing any threatened or endangered species of tree. However, the council at its Feb. 13 workshop scrapped those regulations after several members said they felt the draft was becoming too onerous.

“I would be comfortable if all we did was change the penalty,” said Council Member Lee Kyriacou. “We’re way overregulating here.”

A review of the law was prompted by a property owner who cut down more than a dozen trees. (File photo by J. Simms)

The Building Department would be responsible for approving tree removal permits, and violators could be required to plant replacement trees for those illegally downed.

During the Feb. 13 meeting, Council Member Amber Grant agreed that the law shouldn’t be restrictive but pushed for it to include a standard for replacing trees.

“We’re an [Arbor Day Foundation] Tree City,” she said. “If you want to go cut down 13 trees and you have a permit, great, but we’ve still lost something there.”

Building Inspector Tim Dexter also cautioned the council against placing too much authority with the Building Department.

“We do not have the expertise to identify tree species,” he said. “I’m a building official. I don’t know anything special about trees.”