Beacon city officials, the police chief and school administrators met this week to ensure their emergency preparedness plans are in sync after news broke of the shooting deaths of 17 students and teachers at a high school near Miami.

Matt Landahl, the superintendent of the Beacon City School District, said the district has an Emergency Response Team — which includes principals, administrators and security staff, the Beacon fire and police chiefs and Fishkill police (because one district elementary school is located there) — in place to address a number of scenarios.

“We reviewed our plans, especially in light of what we’re learning about Florida, but also based on what we’re seeing here in Beacon,” Landahl said. “There are some tweaks we’re making as to how we’re training staff and to the plan itself. We had a thoughtful conversation, and it’s ongoing.” 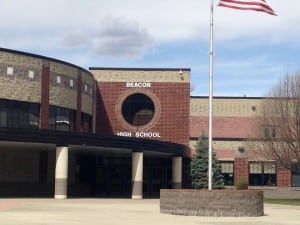 Administrators anywhere are reluctant to discuss details of security plans. But Landahl said he knows that “every single parent is thinking about this.” The district has 2,900 students.

Last fall, then-Beacon Police Chief Doug Solomon recommended that the school board allow him to assign a police officer, known as a school resource officer (SRO), to the district. At the time, Solomon said he didn’t think the district was “where it needs to be” regarding safety plans.

There is a security monitor on duty at each of the Beacon district’s four elementary schools, Landahl said, along with four security monitors at Rombout Middle School and eight monitors at Beacon High School. One of the high school monitors is assigned to after-school events such as sports contests.

Kevin Junjulas, who was promoted to chief earlier this month after Solomon left to take the same job in Newburgh, said on Thursday that he believes school districts everywhere could improve on security. Junjulas last year trained the Beacon officer who would take the SRO position if it’s instituted.

“I’ve advocated for an SRO for a long time,” he said. “I would absolutely support one now, but ultimately school security is up to the district.”

Landahl said during the discussion in the fall that he’d had positive experiences with SROs at a previous job in Baltimore (he also worked in Charlottesville, Virginia; and Ithaca), although some parents and board members bristled at the notion of adding an armed police presence to the schools.

Ultimately, Landahl, who had just come aboard as Beacon’s superintendent two months earlier, conceded that he should familiarize himself with the district before making a recommendation to the board.

That evaluation process is ongoing, he said this week.

“It certainly comes to mind [after the Florida shooting],” he said, “but it’s complicated. My thoughts about the position are positive, but I also realize that some folks have misgivings about it.”

Beacon Mayor Randy Casale confirmed this week that the city would pay half the cost of a school resource officer if the board approves the assignment.

Meanwhile, students and parents were making plans this week to support the #NeverAgain movement that has grown out of the Feb. 14 Parkland attack. A trio of national protests — a 17-minute (one for each person killed in the Florida shooting) school walkout on March 14, a march in Washington, D.C. on March 24 to call for tighter gun-control laws and a high school walkout on April 20 (the anniversary of the 1999 attack on Columbine High School in Colorado) — are being organized, largely through social media.

Beacon parent Julie Shiroishi said that more than a dozen parents were planning to meet on Feb. 22 to discuss “how we can support the Never Again movement locally, and especially in our children’s schools.”

The school district has yet to decide  how or if it would respond to school walkouts, Landahl said.

“My job is to keep kids safe, so I do worry about that,” he said. “But I also think some good conversations can come out” of protests. “Young people having a voice is a wonderful thing.”