Change is in the air at Stewart International Airport, and in the near future it may fulfill its early promise after the Port Authority of New York and New Jersey took charge of the Newburgh facility in 2007 and vowed to make it a viable alternative to the congestion of LaGuardia, Kennedy and Newark.

On Feb. 15, the Port Authority approved a $30 million expansion; a week later it changed the facility’s name to New York Stewart International Airport to emphasize its proximity to the city, especially to foreign travelers.

The Port Authority envisioned using Stewart to divert passengers from its three major hubs that collectively handle more than 125 million passengers annually. The agency projects Stewart will see 600,000 passengers in 2018.

While it offers few direct flights, Stewart provides many advantages to Highlands residents. It is about a 20-minute drive from Beacon and 30 minutes from Cold Spring, compared to 90 minutes to LaGuardia (if you’re lucky). The airport has only six gates and two baggage claim carousels to navigate. Long-term parking is $10 a day, compared to $39 at LaGuardia. 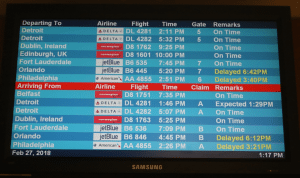 The project will expand the terminal by almost 20,000 square feet, allowing passengers arriving on domestic and international flights to be processed at the same time. A four-booth inspection service for U.S. Customs and Border Protection agents will permit screening of up to 400 international travelers per hour, which the Port Authority says should also increase the number of domestic passengers who use Stewart.

“The goal is to bring more flights and tourism dollars to New York,” said Rick Cotton, the executive director of the Port Authority, in a statement.

The airport expansion also will include a 450-space, solar-powered carport with charging stations for battery-powered vehicles. It is scheduled to be completed in 2020. Signature Flight Support has received the OK to build a hangar for private planes as part of an agency goal to increase private flights by 20 percent. 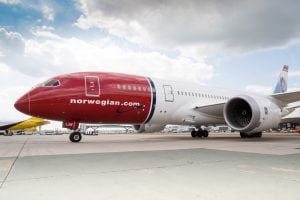 The addition in July of low-cost Norwegian Air, which offers regular international flights to Bergen, Norway; Dublin; Shannon; Belfast; and Edinburgh, brought nearly 200,000 more passengers to the airport in 2017 than it handled in 2016, a jump from 275,000 to nearly 450,000.

On Feb. 26, Norwegian Air announced it would add a second daily flight from Stewart to Dublin beginning April 26, with tickets starting at $99 each way. One flight will depart at 12:25 p.m. and the second at 8:30 p.m.

In addition, Coach USA express buses since June have carried passengers daily from the Port Authority terminal in Manhattan to Stewart, which is about a 90-minute trip each way. Tickets are $20 each way for adults, $10 for children.

The domestic airlines that fly out Newburgh are Allegiant, American, Delta and Jet Blue. USGlobal Airways, a startup based at Stewart that is seeking Federal Aviation Administration certification as a carrier, said last year it intends to operate flights to Paris, Barcelona and Tel Aviv. 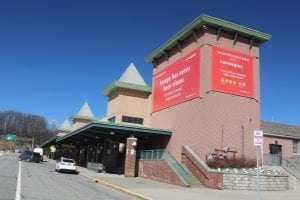 The Port Authority is planning a major expansion of the Stewart terminal. (Photo by M. Turton)

The Port Authority says it has invested nearly $200 million at Stewart since taking over its ownership in 2007, when passenger traffic peaked at 910,000. The 2008 recession hurt the airport, as did the loss of Skybus (which folded in 2008), American Eagle’s flights to O’Hare (which ceased in 2007) and AirTran (which stopped service in 2008, citing fuel costs).

In July, U.S. Rep Sean Patrick Maloney, whose district includes Stewart (as well as Beacon and Philipstown), announced $1.6 million in funding to rehabilitate Stewart’s two runways, one of which is more than 2 miles long.

The airport expansion is expected to create 140 on-site jobs and $10.6 million in wages, according to the Port Authority. Regionally, the project will generate $45 million in economic activity, it said.

1930: Samuel Stewart donates 220 acres of his Stony Lonesome farm to the City of Newburgh for an airport.

1934: The federal government purchases the property for $1.

1939: At the suggestion of Douglas MacArthur, then-superintendent of West Point, an airstrip is built for cadet training. (One of West Point’s gates is still named Stony Lonesome.)

1970: Stewart Air Force Base is deactivated.

1982: The airport’s operations are transferred to the state Department of Transportation.

1985: The New York Air National Guard establishes a base at Stewart. 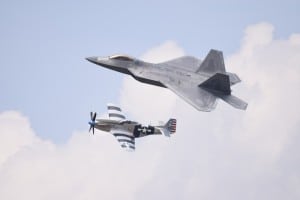 The New York Air Show debuted at Stewart in 2015. Shown here are supersonic F-22 Raptor (above) and a P-51 Mustang. (File photo by M. Turton)

2001: Stewart takes in planes as flights are grounded worldwide after the Sept. 11 terrorist attacks.

2006: JetBlue and AirTran begin flights out of Stewart.

2015: The annual New York Air Show makes its debut at Stewart, the largest event ever held there.

2018: The Port Authority announces a $30 million terminal expansion and changes the name of the airport to New York Stewart International Airport.