The glow of tube lights around my house is a sign of hope that spring is coming. After opening up space in our yard to let in more sunlight, we’re able to plant a full vegetable garden. The plans are made and the seeds are started for transplanting as soon as all this snow interference clears.

While trying to grow more vegetables and perennials from seeds, I discovered something surprising. Most organic produce doesn’t start with an organic seed. There isn’t enough supply to meet the “growing” demand. When the standards were set for organic certification by the U.S. Department of Agriculture, there was even less supply. As a result, farmers are allowed to source non-organic seed and still meet the certification.

Regardless of the seed, produce marketed as organic isn’t sprayed with chemical fertilizers or pesticides that poison beneficial and harmful insects indiscriminately. The soil health in organic growing depends on amending it with organic matter that decomposes slowly and feeds the roots and microbes, not dumping synthetic compounds that can damage the soil and run off into waterways. 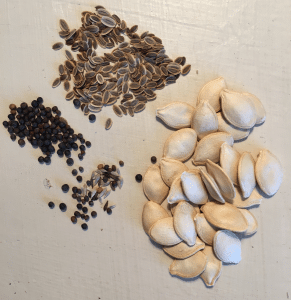 Seeds waiting patiently for the snow to GO AWAY (Photo by P. Doan)

Does that mean the organic tomato you bought at the supermarket may have been grown with a genetically modified seed produced by a biotechnology company? No. It is against organic regulations to grow organic crops from GMO seed, although a 2016 report by the Organic Seed Alliance (OSA), a nonprofit that advocates for seeds as a resource for the public good, notes that genetically engineered material “continues to end up in organic seed, crops and food products even when prevention measures are in place.” The report found that only 18 percent of vegetable growers reported growing from 100 percent organic seed.

The odds aren’t in favor of organic seeds. In its report, OSA pointed to a study by Phil Howard at Michigan State University that found three corporations control more than 50 percent of the global seed market and that four corporations control nearly 90 percent of the worldwide retail market for corn. Seeds are being patented and privatized, making it illegal for farmers to save seeds for the next crop. “Policy isn’t keeping up with how fast the technology is changing,” says Kristina Hubbard of OSA.

The challenge ahead is a loss of genetic diversity. About 90 percent of seed diversity has already disappeared. The methods of producing seeds and growing plants require heavy inputs of chemicals and lots of energy. Market consolidation makes it less economically viable for organic farmers to become seed producers.

Hubbard cites some of OSA’s partnerships as bright spots in this landscape. One example is the success of Who Gets Kissed Sweet Corn, an open-pollinated, organic variety that was bred with input from organic farmers and plant breeders at the University of Wisconsin-Madison with funding from the Organic Farming Research Foundation and the USDA. It’s also an example of how regional breeding trials make a difference.

More research and funding is needed for regionally specific seeds. Locally, we’re fortunate to have a resource like Hudson Valley Seed, which produces organic, open-pollinated and heirloom seeds and does all of its plant breeding and trials here. These seeds are bred to succeed in our climate and soil temperatures.

Climate change makes issues about seeds urgent. For decades, experts have been raising alarms about the fragility of our food system and its dependence on chemical inputs and fossil fuels, among other things. Extreme storms, unseasonal temperature fluctuations, water scarcity and flooding, and new threats from pests and pathogens are some of the problems farmers are dealing with in a warming world.

If you want to be an organic gardener, starting with organic seeds can yield better results. To make your garden even more affordable, choose open-pollinated varieties and save seeds that you can plant the following season. Just like that, you’re breeding plants to adapt to your specific growing conditions.