Somewhat unbelievably, Jesus Christ Superstar is middle-aged. Yet, the rock opera, born from a concept album, has a timeless storyline paired with an opportunity for those telling the tale to belt and emote and otherwise let it rip.

With teenagers seeking to shape laws and effect change, the material seems very much of the moment for its presentation April 13 to 15 by students at Beacon High School. 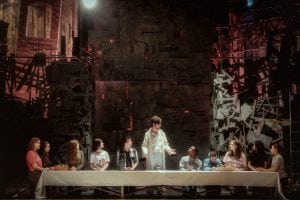 First produced in 1968, the musical is based on the final week of Jesus’ life, as seen through the eyes of Judas Iscariot, who betrayed him. It features well-known songs such as Superstar and I Don’t Know How to Love Him. Written by Andrew Lloyd Weber with lyrics by Tim Rice, it is loosely based on the Gospels and explores the relationships and struggles between Jesus and his followers.

Anthony Scarrone, who directs the Beacon Players (and, in something of a miracle, is directing a production of Les Misérables at Spackenkill High School the same weekend), says about 75 students are involved in the production, including in the pit, where the 11-piece band is a mix of student and professional musicians. 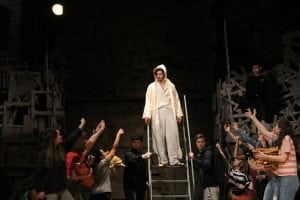 The grand entrance of Jesus (Photo by Sierra Caban)

The cast has been investigating its characters. “Every one of the students playing the apostles has traced where they wound up,” he says. “It was important to be sensitive to the plight of the people and their fear that their religion would be toppled. The kids have been getting into it, even arguing — in a good way — about the political and religious issues that have come up.”

Outside of the roles of Jesus (Zack Kotzias) and Mary Magdalene (Elizabeth Cenicola), the show was cast without regard to gender, resulting in a female Judas (Leah Siegel) and a mix for the other roles, including the apostles. Scarrone says he does “age-blind” casting, choosing a senior only when it comes down to all things being equal at the auditions. 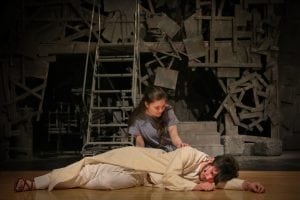 He says the players continue to raise the bar with their productions. “We have flame bolts that look like fire, a rising cross that was welded by a parent, a 37-foot-high set,” he says. “We’re in the home stretch now; everyone’s just chomping at the bit.” Of the Easter Sunday live performance of Jesus Christ Superstar on NBC, Scarrone quips, “That’s just a warmup for us!”